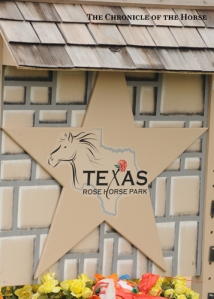 Whew! I’ve finally got some time to sit down and relax after traveling to three shows in a week.

It all started with the American Eventing Championships in Tyler, Texas. After some schedule shuffling, I made it down late Thursday, but ended up having to drive from Dallas to Tyler, which was about a two-hour drive in traffic. At least I got to see Dallas up close!

It wasn’t deathly hot, but still hotter then I’ve been used to after our cool late summer. The Texas Rose Horse Park was workmanlike and tidy, but not what I would call “stunningly beautiful.” It seemed to be in the middle of nowhere, amongst cows and open fields, but apparently Tyler has a population of close to 100,000.

The cross-country featured a ton of brand new jumps and I thought the courses looked challenging and up to the standard that we’re used to in Area II, but with a little less terrain. It was quite dry, but they aerated.

I got to have some help from my former officemate and friend, Megan Brincks, who moved to Fort Worth to work for the American Paint Horse Association. We had a great time and I wish we’d had more time to just hang out and have dinner, but we were so busy. Here’s a link to all of our coverage. 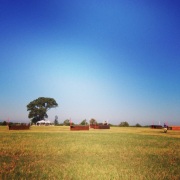 It cooled down a bit on Sunday after some storms, so I was able to go to the tiny Tyler airport minimally sweaty and with only one fire ant bite! My flight to Dallas was all of 20 minutes in the air, which was pretty funny, but there were no direct flights from Tyler to D.C.

I’m still learning about the hunters, but from what I could gather, the WCHR (World Champion Hunter Rider) program is kind of like the Adequan Gold Cup series in eventing. Certain shows are designated WCHR shows and riders can gain points for the final each year. I still don’t know how some riders could qualify to ride in both classes, but hey, what’s another ribbon? 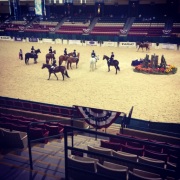 Greg Crolick won the Developing Pro class and he was a pleasure to talk to. I find that a lot of hunter riders are tough to talk to because they ride so many horses and compete in so many classes that they really don’t develop a relationship with the horses they ride. So when I ask, “What makes him so special?”, I don’t often get a good answer.

I also find it tough interviewing hunter and jumper riders because I don’t follow that scene as closely, so I don’t always know the background of the horse or rider before I interviewthem as they come out of the in gate.

The night ended pretty late, but I was happy with my photos and coverage.

I’m not sure why I decided to go, but I dragged myself out of bed early on Saturday to drive up to Morven Park to take photos of the advanced cross-country. I was really tired and it was really hot, but Morven is one of my favorites and the advanced only runs once a year now.

As expected, several pairs withdrew due to the hard ground, but about 15 still went. I had planned to stay up and watch some of the intermediate too, but I was fading fast.

Now I’ve had the rest of the weekend to recover and get ready for Harrisburg next week.