Life is finally starting to feel a little more normal as the weather’s been getting warmer. Oh So and I are about six weeks behind in our competition season due to the strangles, but we were able to get out to a combined test and Twilight Eventing at Loch Moy, both of which we won!

The dressage test at the combined test felt a bit tight, although it scored well, but I was fine with it since it was the first show of the season. He was much better for Twilight–very relaxed and supple and loose in his body. 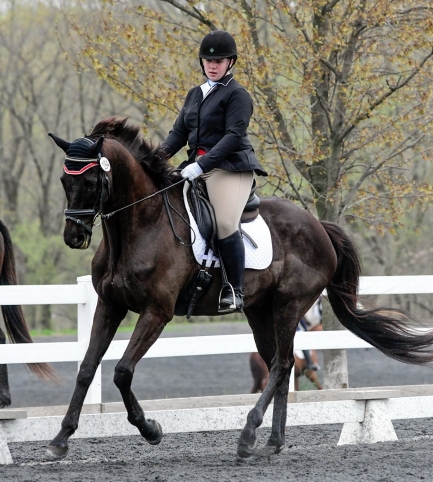 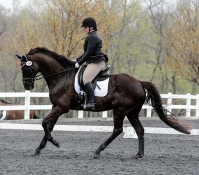 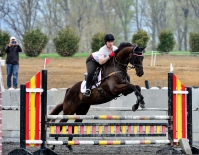 My show jumping round at Twilight wasn’t the smoothest since I’d had two rides on him after being gone for a week at Kentucky, but we were there for the cross-country anyways!

It was a pretty simple course, but it was open and gallopy, which is what he needed for his first run of the year. Now we’re looking ahead to the starter trial and some recognized events in June and July.

He’s been looking really good lately and feeling even better. I decided to keep him on stall board through the summer to help put some weight back on after he lost about 50 pounds due to the winter and his illness. He’s happy to be inside eating all day and away from the bugs I think. I’ve changed up my routine so I go for a 20-minute hack before we work in case he’s a little stiff from being in. He’s also been extremely spooky, which is kind of funny!

I think his neck injection is really kicking in because he’s been very supple and working really well on the flat. We’ve had a few lessons with my dressage trainer Heidi, and we’ve been working towards improving his changes. He’s accepting leg yielding away from the wall and back for the most part, although this week every time I leg yielded off the wall on the left lead he gave me very lovely changes back right! It’s kind of funny because you could tell he thought he was doing the right thing. I just stayed calm and got the correct lead back and continued to leg yield until he listened to my aids. We also played with some canter/walk and walk/canter transitions and haunches in which will all help improve those changes.

We’ve been working on gymnastics with Lisa since he’s been getting pretty excited jumping lately, so we’re just dialing it back a bit to make him sit and wait.

I’ve been on a couple of work trips since my last update, including The Fork and Kentucky. The Fork was a bit underwhelming as far as entries go, but Boyd Martin won, and it was kind of a cute story.

Kentucky was a lot of fun, but a very long time to be gone. In the end, Oliver Townend won, which was a bit of a bummer since everyone was rooting for Boyd to be the first U.S. rider since 2008 to win it. Maybe next year!

Now I’m off to Jersey Fresh for the weekend. Looks like it might be a bit wet!