Well, things didn’t go according to plan at Seneca. It was pouring rain on Saturday when I went up to walk my course, and Lisa and I pretty much knew we wouldn’t be running the next day.

Fortunately they made the decision a little easier for me when they cancelled all competition on Sunday, but it was a real bummer for me and for the event!

I had to head to WEG the next day with my co-worker and friend Kimberly. We arrived late afternoon to check out the venue and get our credentials, which went pretty seamlessly.

The venue was a complete mess, but the two main stadiums and the footing were great. I keep telling everyone who asks how WEG was that I went in not expecting a lot of polish, and we definitely didn’t get that. The media center was not ready for us on Monday, but by Tuesday it was functional. There was air conditioning, power and WiFi, which was about all we really needed. They fed us two meals a day plus a generous afternoon snack, which is more than we could have asked for and very much appreciated.

It was a long, hot week, but it was pretty incredible to be able to shoot eventing dressage, talk to riders like Ingrid Klimke and Julia Krajewski, then run a couple hundred feet to shoot the best dressage riders in the world and talk to them.

We got incredibly lucky on cross-country day with just a bit of rain before Hurricane Florence hit on Sunday. Luckily I was pretty familiar with the course so even though I didn’t have a chance to walk it before, I knew where I wanted to go. I was pretty happy with my photos.

This one of Ingrid Klimke is one of my favorites.

We had a delay of a day because of the hurricane, so show jumping was on Monday. It was hot again, but it was a nail-biting finish. Unfortunately our U.S. team didn’t get Olympic qualification, but we finished a team, so that’s a start!

I drove back Tuesday and ended up getting a pretty bad cold that knocked me down for the rest of the week and into the following week. I was just super tired but managed to ride and had a good cross-country schooling at Loch Moy. I’d wanted to go up to Plantation Field the week after WEG but was just not feeling it. It ended up pouring rain the whole time, so if ever I was going to miss a year, that was it.

Oh So has been going well. I had the chiropractor out recently, and he palpated quite sore to the SI and lumbo-sacral joints. I was a little alarmed since he had the SI done in the spring and has not been lame under saddle. In fact, he’s going better than ever. I’ve consulted with his regular lameness vet, who said to follow the chiropractor’s advice on injection, which was to watch and see how he does under saddle. Clear as mud! It certainly couldn’t hurt to get it done, so I’m leaning towards that.

I had a bit of a tough flat lesson last night with Heidi. We had a decent ride last week with her but this week he was really resistant in the left shoulder-in. She wanted me to keep riding through it and insist he bend, especially through the corners, and he did have a couple of meltdowns where he just stopped.

I don’t like riding him to that point, which doesn’t happen very often thankfully, but she talked about how that true bend and sit in the shoulder in and haunches in are the missing pieces for us in the third level work, and if we want to improve our scores we have to work through it.

I think I tend to ride him to protect him a bit and don’t like rocking the boat because of his age and history, but I do need to challenge us more often, even if it gets a little ugly. Some of it may be physical, but doesn’t show up as lameness, so we’ll monitor carefully as we continue to work this fall and winter. Right now our homework is to just work three days a week in some shoulder in and haunches in in trot and canter. Then hopefully the changes will come better.

I just got back from a nice weekend at Dressage At Devon, and now it’s hot! Will summer please just end?

I’m going to go watch some cross-country at Morven Park this weekend, which should be dry for once!

Our photos from our last two shows finally came! 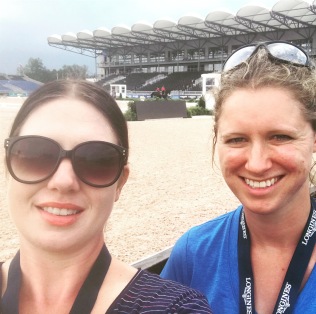 Kimberly and I upon arrival! A rare selfie for both of us! 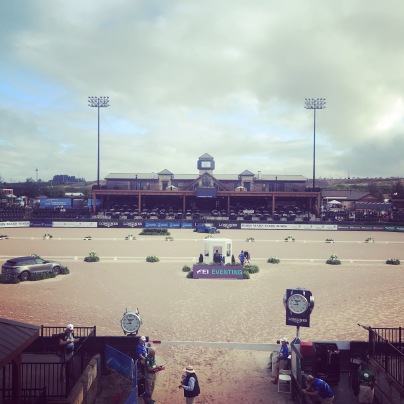 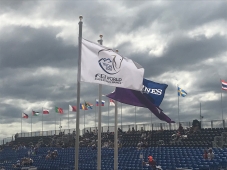 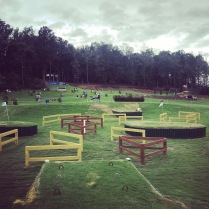 Getting a little wet on cross-country day, but it didn’t last! 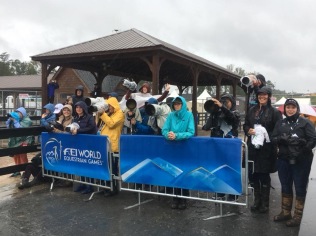 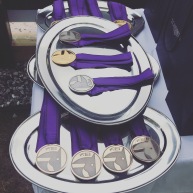 Chilling by the medals. 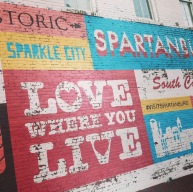 We had a lovely dinner in Spartanburg, S.C.

Finishing up a wild, windy, warm weekend in Welly World! Saw the best eventers, show jumpers and dressage riders in the country (plus my best media friends and my parents), all in a span of four days! 🏝☀️🐴