We’ve had crazy amounts of rain over the last week, and I was kind of glad I wasn’t entered at an event because there was no way we would have run.

But I didn’t really expect the brand new fancy all-weather rings at Morven Park to be unrideable on Saturday.

I’d entered the PVDA Spring Dressage Show, and had planned to do two first level tests on Saturday and two second level tests on Sunday to knock those scores out and start really working on the third level tests for my bronze medal.

By the time my first ride time came around on Saturday afternoon the rain had stopped, but the warm up footing was just horrendous–uneven, deep and sloppy. It’s similar to the footing at Morningside, sort of a wax-coated sand, and if it rains a lot the week before a Morningside CT, I don’t go.

The minute we stepped in the ring Oh So started tripping in walk. I tried a bit of trot and canter, and it wasn’t much better, so I tried trotting on the bluestone outside the rings. He was a bit tense and unhappy at that point, and with no warmup, even for a first level test, I wasn’t feeling good about it either.

I trotted around the outside of the competition ring when it was my time, and it was similar, so I told the judge I was scratching.

I was pretty upset about that. Just more money down the drain, but I have to keep his soundness in mind. Deep is not good for him. It’s just frustrating since the bluestone and rubber ring at the barn was fine, and the indoor at Morven was unavailable. Sometimes fancy footing isn’t all it’s cracked up to be.

Luckily in dressage if you scratch, it doesn’t mean your whole show is over, so I came back the next day cautiously optimistic. It was quite hot and sunny, and the ring was 95% better, so we went for it.

I think he doesn’t love that kind of footing either way because he tripped a couple of times, but it was much more even, and there were no holes.

I think because it was so hot he was a little more willing to work with me, so I felt for both tests that he was fairly rideable and not tense, just anticipating a couple of things.

We’ve always had issues with him wanting to jig after a canter/walk transition, just anticipating the next upwards transition, but I thought his serpentine with simple changes across the centerline were decent. One was a bit abrupt down, but he didn’t anticipate. He did flip his head in the upwards transition at C after a medium walk in the corner, so that wasn’t helpful, but that was the only serious mistake.

The medium trots sitting are difficult for me, and I definitely bounced, so it wasn’t the prettiest picture. I need to continue to school those at home, and the judge commented that I need to flow more with him. Noted!

The second test felt about the same, but I thought the pattern was a bit more difficult. I wasn’t confident in my geometry, so I think my half turns on the haunches were a bit off in particular.

The judge wanted to see more angle in the haunches in as well. We scored a 63% on the first test and a 65% on the second test. We ended up winning the first class and getting second in the other!

Our scores were mostly 6s and 7s. We did get one 8 on our first centerline and one 5.5 on the rider score for my bouncing, which was sad, but not undeserved. I’m hoping we can turn a few of those 6s into 7s and maybe get a few more 8s next time, but now that we have those two second level scores we needed for the bronze, we’re going to leave that level behind for now until we can get through the third level stuff, especially the flying changes.

He’s been offering them when we school the second level counter canter, which is appreciated, but not needed, so hopefully we can cut down on his confusion now. I’m bummed that I have to try to find another show to get those first level scores out of the way though, but I feel a sense of accomplishment to have gotten our scores at a licensed show and won! I wasn’t expecting that. 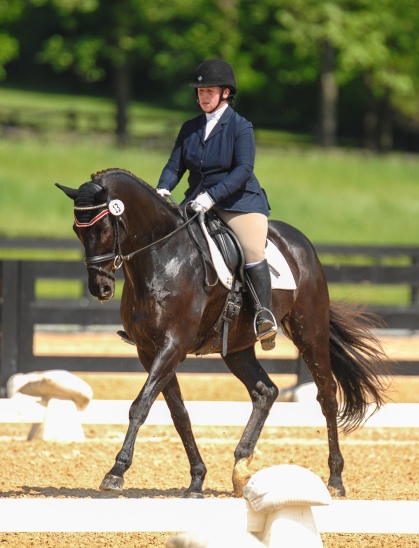 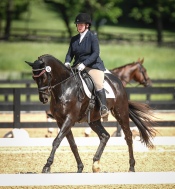 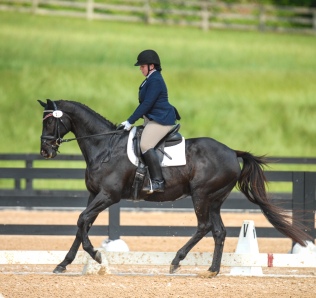