I’d been peripherally aware of Majyk Equipe’s cross-country boots because Boyd Martin had been the face of the brand when they first came out, but I didn’t really pay attention because they seemed like just another pair of black cross-country boots, and I was happy with my Premier boots.

Then they came out with the Elite X Country Boot in colors, including black and red, and I suddenly paid attention!

My Premier front boots were getting pretty beat up, so I knew it was time to try something new.

Boots that slip are a big pet peeve of mine, and the breathable inner mesh fabric on the Majyk boots really kept them in place. The boots are made from a lightweight rip-stop Thermoplastic Polyurethane material, and the inside is flexible, while the outside is made of a pliable material that changes its molecular structure to harden when struck, which is meant to deflect impact way from the strike point and disperse energy. Fancy!

The bio-foam interior helps keep the legs clean and cool, and the design is also meant to repel water and dust. The Majyk “Forever Clean” coating on the outer shell is meant to cut cleaning time in half.

I definitely found the boots to be easier to clean than the average cross-country boot. If I’ve just had a quick cross-country schooling I’ll just rinse them off.

I’ve never had an issue with his legs getting too hot–I’m more interested in them not slipping or getting stuff underneath them. The boots fit fairly close to the leg, and don’t have a noticeable strike plate running up the back of the leg like the Premiers do. They’re  pretty water-proof, which helps to keep them from slipping. They’re also very lightweight.

So far I’ve only tried the front boots. We’re a bit mismatched right now with the Premiers on the hind! The front boots have two velcro straps with no elastic in them, which I actually think is good so they won’t get stretched out. I had an old pair of Eskadron cross-country boots that did that, and then they’re pretty useless.

Now I need to save up for the hind boots, and we’ll be matching! 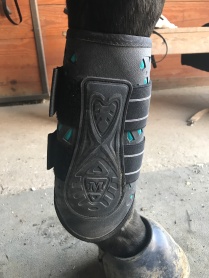 I’m a huge fan of fleece-lined dressage boots, but when I bought Thomas I decided to get him non-fleece boots that cleaned up easier and didn’t get stuff stuck in the velcro. Enter the Majyk Sport/Dressage Boot.

After I sold him, I used the boots on Oh So, but I’m afraid the Large is not quite right for him. The length is right, but not the width as you can see from the photos. They’re similar to the cross-country boots, but with less material and no strike pad, so you get the same non-slip material on the inside and the easy-to-clean outer material, plus the great colors!

They don’t seem to contour to his leg as much as I’d like. When tightened they press into his fetlock a bit, so I’m worried about rubbing if used too often.

It’s a shame they don’t quite work for him, but otherwise they’ve been a sturdy and stylish pair of schooling boots.

The front cross-country boots retail for $99, while the dressage boots are $89.99 for fronts.