He’s sound! Hooray! I had the vet come out yesterday, and we flexed him and lunged him, and he looks good. He was just a bit crazy on the lunge. I’ve never actually seen him buck before! And I almost lost my hand jogging him, but we’re crossing our fingers we’ll be set to do the whole event next weekend.

Well, someone or something in the universe is conspiring against me it seems! The same day I posted my last blog about how wonderful it is to be back out, I went to the barn and saw Oh So got an injury.

It’s a small nick on the outside of his right front, which unfortunately is right over top of his old suspensory. 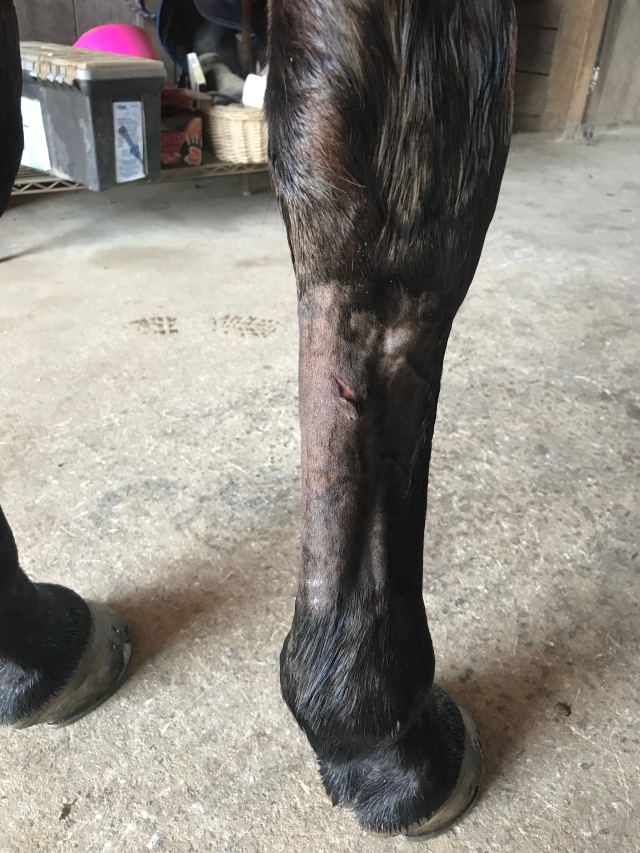 He was pretty lame in trot, so I decided to get the vet out on Saturday morning to ultrasound. Luckily there were no significant issues upon examination, so we’re wrapping, icing and confining to a small paddock this weekend instead of competing.

I think it’s just the actual blow that’s making him lame, so I’m hoping with a few days of rest he’ll be OK.

I know people always say, “Oh, it’s horses,” but I am getting a little sick of my luck. I’ve waited a year to compete and now that we both can, we can’t.

I finally had some sense of balance and happiness where everything was finally going right, and now it’s gone again. And people wonder why I’m a pessimist!

I ‘m hoping against all hope that this is minor and he’ll be feeling better before Loudoun in two weeks. Wish us luck!

3 thoughts on “A Quick Update”