Yesterday Oh So and I finally got to leave the start box for the first time in nearly a year. I really can’t believe it’s been that long, but with my injury and then the fall and winter weather, the timing was bad, and it just didn’t happen.

I’ve been dying to get out all winter, but we had a very cold and then wet winter, so we haven’t been able to cross-country school much.

We went to Loch May last week before I went down to The Fork and had an easy school just getting us both used to cantering and jumping up and down hills. When you’ve been on a flat surface all winter it takes a little while to get that feel back!

I’d never done a Twilight Eventing at Loch Moy. It’s basically a full event, except for maybe a few less fences on cross-country. We kept it fairly conservative in the dressage warm up to keep him chill, and I thought the test was OK. We scored a 31.9. Not our best, but it’s just really hard to “show him off” in a novice test when we’ve been working on second level stuff all winter. There’s just not enough for him to do in the test. The judge actually thought he needed more impulsion, and gave him a 6.5, which was surprising. Maybe he needed a little more in the canter, but any more in the trot, and he would have been verging on quick.

I actually thought I rode fairly well in the show jumping. I’ve been getting in my head a lot recently, mostly about the fact that I never feel practiced enough. Jumping one or two times a week is hard to do, but I’ve only got the one horse. It’s a perfectionist’s nightmare!

It can get frustrating when I’ve ridden fairly competently around prelim and training for many years to have trouble in novice show jumping. I think I really just need to get out of my head and just do it in a competition setting. I find I ride better in both jumping phases when I compete regularly, which is why it’s been so hard these last couple of years. Schooling is very hard for me.

Despite my perceived issues, Oh So was super excited to head to the start box and was prancing around, just like the old days!

I’m going to keep the feeling in my mind of the jump we had over the first fence. It was forward and lovely; the perfect spot! The rest was quite good. He was very on, I didn’t screw up too much, and we finished well. He’s a bit out of shape so he was little puffy at the end, but it was a good fitness run for him.

It’s hard to describe the feeling of being able to compete again. It’s that high at the end of the course you get, that feeling of ticking off each fence along the way. It’s something that’s been missing from my life for the last year. I don’t care that I’m running my prelim horse novice, I still get butterflies before I go in the ring for show jumping or the box for cross-country.

I love my job, but sometimes watching other people have fun and not being able to experience that same feeling of euphoria and accomplishment is tough.

In a way, I feel complete again.

I’m a pessimist by nature, so I can’t believe I’m saying this out loud, but I feel like this year is going to come together for us. We’re back on course, literally and figuratively. He feels better than ever, and he’s 18. We have to keep the jumps low to keep his soundness, but I don’t think he really cares how high they are. He treats a novice course the same as a prelim; pulling all the way home!

I’ve been on a few more trips since my last post. First up was Red Hills in Tallahassee. It’s always a unique event since most of the spectators are locals who know nothing about horses. It’s great that the event does such a good job of bringing in the public and educating them. 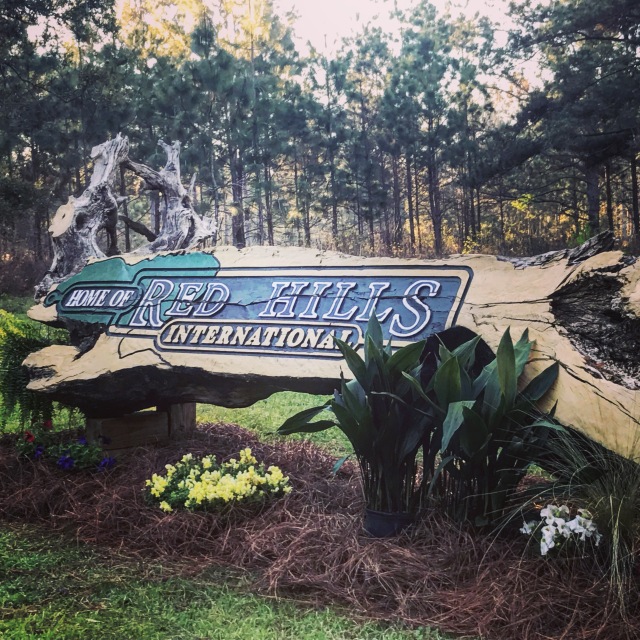 Next up was a super cold and rainy Carolina International. It’s another favorite of mine because you really get the best of the best in a highly competitive CIC***. The rain held off until the advanced division for cross-country day, but it was a cold and driving rain for the last hour!

In between Carolina and The Fork I moved Oh So to a different barn. I’ll just say that while the barn I was at before was lovely, it just became too much of a personality clash with the barn owner, so I had to leave.

I found a lovely place right across the street from Surefire Eventing, and only 15 minutes  from work. I really can’t believe my luck! The hacking is incredible. It’s something we’ve never really had before, so we’re going to take advantage of it for both of us.

He has a nice, big grass field with no mud, and seems to be very happy so far.

I headed to The Fork last week, which is held at the Tryon International Equestrian Center. The WEG will be there in September, and right now it’s really hard to believe it. There’s so much construction going on, and the cross-country course hadn’t changed much from the AEC in the fall, but we’ve been reassured it’s happening!

I’m got a quite rest of the month since I’m skipping Kentucky this year. I’m kind of sad to miss seeing all my friends in one place, but I really want to compete now that Oh So and I are both feeling good. I’ve entered the Loch Moy starter trial this weekend and then Loudoun on Kentucky weekend. After that I’m entering a licensed dressage show at Morven Park to start working on getting our scores for our bronze medal.

We need two scores above 60 percent at first, second and third level.

I’m also heading to Badminton in May with a friend. I’m super excited to be ticking this one off my bucket list. It’s mostly a vacation but I’ll definitely be taking photos for COTH too. Why not?