Long time no update! There really hasn’t been much to talk about as far as my riding since my last update, but I did have a really good lesson with Heidi before I left for two COTH trips, and I’ve been hanging on that feeling ever since.

I’ve just gotten back from two back-to-back trips, first to the Adequan West Coast Dressage Festival in Del, Mar, California, and then to Wellington for the Adequan Global Dressage Festival. Two weeks of fancy prancing, and I’m inspired to put on my fun-colored breeches and make Oh So wear his blingy browband, but I’m ready to jump!

Before my whirlwind trips I was finally able to connect with Heidi for a flat lesson. I haven’t been able to see her since late November because of the weather on the weekends, so I’ve felt a little lost working on my own, knowing that I’d really like to get the right to left flying change this year.

We had a very good lesson where we touched base with some shoulder-in and haunches-in on the long side to supple him, then went on to work on the changes.

We started just asking for them on the diagonal, but then we played with keeping the counter canter and making him bend his head and neck left and right, listening to me and not trying to change. Once he was supple that way, I asked for the change on the long side.

We mostly did it in right lead counter canter, and he did a couple of clean but ugly changes left. He still thinks it’s OK to slip in a trot step, so we’ve got a lot of work to do yet. I think a lot of it has to do with me just not being educated enough to have the feel and timing right, so we figure it out together! I’ve been playing around with the changes at home on my own, and found that if I just shift my seat bones and try not to swing my legs too much he’ll often have a quieter response, so we’ll keep working on that too.

I was kind of inspired watching Laura Graves and Verdades do their changes this weekend. Rider after rider in the CDI would swing their legs wildly in the changes, and her legs didn’t even move! That’s really what it’s all about, the invisible aids.

Heidi has confidence we can get our scores for our bronze medal this year, so I’m keeping that as a soft goal in my head. He feels better than ever, but I don’t want to get my hopes up and be disappointed if we don’t reach a goal. The only thing besides the changes that’s holding us back is my inability to sit the medium trot, so I’m forcing myself to keep working through it and working on some flexibility and strengthening exercises at home.

Oh So is celebrating his 18th birthday today. How time flies! He doesn’t think he’s a day over 5!

My trip to California was pretty amazing, and I wish I’d had more time to explore San Diego. I had a couple of hours before the jog on Wednesday when I arrived, so I drove 5 minutes from the airport to Balboa Park and wandered around. There were a ton of museums that seemed fun, but they were all randomly closed on Wednesdays!

The CDI was quite small with only three rings. The international covered ring was lovely, and I spent most of my time there. My hotel and the horse show was very close to the beach, and I had some time in the mornings to go have my bagel and hot chocolate on the beach, which was lovely.

I flew home Sunday and had two days to hack Oh So before heading off to Wellington for the CDI*****. My parents wanted a beach vacation so they came down with my aunt to visit Palm Beach, and they came to the both AGDF and WEF. It was fun to show them what I do, even if I didn’t have a ton of time to hang out.

I flew back Sunday and had enough time to hack Oh So before it got dark. We had tons of rain while I was gone, so everything is a muddy mess, but hey, we’re in mid-February, so we’re almost getting to the start of show season! I’m hoping to get Oh So out this weekend for a jump lesson, but Heidi’s out of town the next two weekends so we’ll continue to go it alone. 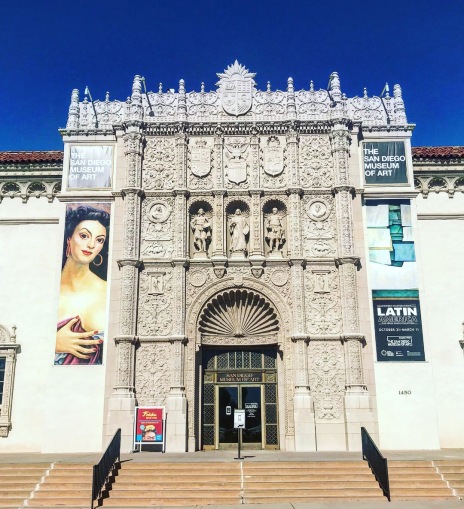 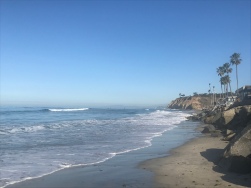 Ready for the Helen Langehanenberg Masterclass and freestyles! 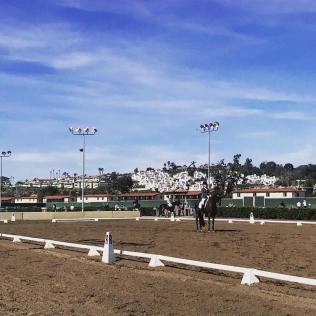 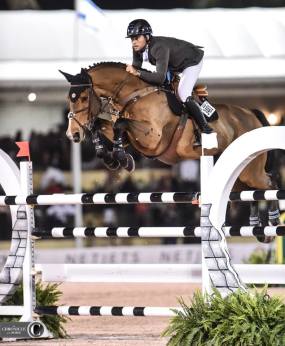