Spring has finally spring in Virginia, and I’m ready to start competing and getting Thomas out and about!

After my last post, I took Oh So to Morven Park to see Dr. Adams assuming we’d get his hock or stifles done.

Upon flexions though, he was very good from behind and mildly positive on his right front ankle. He had some mild inflammation there that Dr. Adams thought was some minor arthritis, so we injected that and a few areas in his back behind the saddle where he palpated a bit sore.

The good news is his left front ankle and the areas around his windpuff and deep digital flexor tendon sheath flexed 100 percent negative! Dr. Adams admitted he was a little nervous to see him considering our last appointment he was not feeling positive about his overall soundness and ability to continue competing, but he said he looked better than ever. He’s gained 100 pounds since August too thanks to a good feeding program from my barn owner.

I entered Morven Park with the assumption that it would be wet and we might not be able to run cross-country, and unfortunately a ton of rain on the Friday before meant the footing wasn’t going to be ideal for him. Any other year I would say the footing was pretty darn good for Morven, especially by the time I would have gone on Sunday, but there were too many spots of concern on course for Lisa to want to risk him.

I’m bummed it became an expensive combined test, especially considering we were leading after show jumping!

He was a little up as we headed down to the dressage warmup with atmosphere, but as soon as I picked up the reins he went to work. He was a little tight as we got to the main arena and started trotting around, but I tried to stay as relaxed as I could. He can be forgiven for being a bit tense for our first outing of the year! Unfortunately he got me again in our free walk and anticipated the medium walk and jigged, so there will be some dressage schooling shows in our future to get that under control again.

I was remarkably relaxed for show jumping, and we warmed up quite well actually. He was jumping big and I wasn’t picking! The round was quite good–no picking, no rails and he got all his leads because I wasn’t ducking. I was really pleased considering we’d had a bit of a tough lesson the week before. Not bad, just the fact that he didn’t want to sit and rock back over the jumps. We ended up putting some ground rails in front of a few of them to make him wait, but I counted on him backing off the jumps at the show.

I decided against entering MCTA in May because everything is on grass and it can often be wet. Such is life these days for us. Instead, I’m going back to Morven to try my hand at a recognized dressage show.

The last time I did a recognized dressage show I had Palais and was in the junior division, so it will be interesting to see how we stack up. I’m expecting it to be tougher for sure, but maybe we can win a TIP Award?

We’re doing First 2 and 3. I’m hoping two tests in a day will get him a little more rideable in the ring. If that goes well there’s a recognized show at Loch Moy in June that would be fun to try.

Next up for us though is the CDCTA schooling day on Saturday and the Loch Moy starter trials next week.

Thomas has been going well, but unfortunately at the end of March I felt some funny steps from behind. I did a couple of days of bute thinking it was because he had run around a lot one day when I was there, and then he came sound and had a great lesson with Lisa that weekend.

My farrier came on the 29th and he was sore on his left hind foot and heel in particular, but the farrier thought it was the way his alignment and gait was as he’s been working to correct it.

He was still sound until last week when he was not wanting to walk on it. While I was away at The Fork my barn manager’s farrier came out and found an abscess. I’ve been soaking it this week, and my farrier comes tomorrow, so fingers crossed we can put a shoe back on because I’m home for two weekends in a row, and it’s time to get him off property! He’s also bored and ready to get back to work so I’ve been trying to mess with him in one way or anther every night. We’ve groomed, hand grazed he’s helped me set up jumps in the ring!

As far as travel, I’ve since been to the Carolina International and The Fork since my last update. Carolina is always lovely, and the weather was perfect. I got some great photos too, but I was really envious of those who got to ride the training course. The Carolina Horse Park is one of my favorite venues, and I really want to go back and compete.

The Fork was held at the Tryon International Equestrian Center, and it was my first time there. Let’s just say it was definitely better than driving to podunk Norwood, N.C.!

I’m not sure I totally agree with the main venue’s courses. Many of the lower level jumps were set in the arenas and in a derby field, although I found myself thinking it would be the perfect place for Oh So because you can guarantee the footing will be good! But it just didn’t feel like eventing to me.

The brand new three-star course was pretty cool though. It was open and gallopy and the footing felt like carpet. They’ve barely scratched the surface of what the World Equestrian Games’ course will be, and it was exciting to be there to watch it christened. I loved my photos too!

Now I’ve got a couple of weeks until the big one…Rolex!

Here’s a few photos I took of the boys with my nice camera recently. Oh So’s in his ugly phase right now, but once his summer coat comes in, he’ll look great! 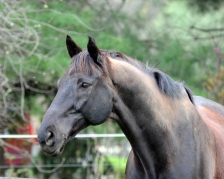 Oh So is a funny color this time of year.

One thought on “Out And About (And An Abscess)”