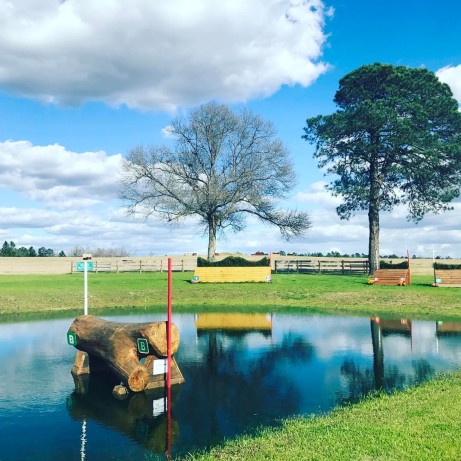 I’m knee-deep in my busy spring travel season, but I just wanted to write a quick update about my trips so far.

My most recent trip was to Pine Top in Thomson, Ga. I’d never been, and since they added a CIC*** last year that was well attended, I thought it might make sense to go this year.

Unfortunately entries were way down, and only 13 started in the three-star, but I’m still happy I went.

The trip there was not super fun, as I got to ride on a tiny propeller plane to the Augusta regional airport, which was loud and scary!

The event was kind of in the middle of nowhere, but the historic farm was really beautiful.

I arrived on Thursday afternoon and walked the cross-country course. I was immediately overcome with this feeling of, “ah…” It was such a beautiful day, everything was really green and pristine, and it just seemed like a really nice, no frills kind of event. It really made my heart pang a little, wishing I was riding myself.

I sat down with the owner of the farm, who couldn’t have been nicer. He even invited me to an anniversary dinner with his wife and 20-plus other people at the local Mexican restaurant!

Friday was fast and furious, and Clark Montgomery was the eventual winner–always a favorite of mine!

The lack of media attention was kind of refreshing to be honest. I love all of my regular media friends, and while I had to round up the people I needed to talk to myself, it just made the day feel a little more casual and a little more down-to-earth after spending so much time immersed in Wellington with sponsors and VIPs and wealth.

I wish there had been more riders so I could have wandered around a bit, but I found a good spot and was pretty happy with my photos, and I only came home with one fire ant bite!

I got an email from the farm owners on the Monday after the event thanking me for coming, which was so nice.

Earlier in the month I had an insane two weekends in Wellington covering the $100,000 Wellington Eventing Showcase, the Great Charity Challenge, the Palm Beach Masters and a CSI**** Grand Prix, then I went back down three days later for the Adequan Global Dressage Festival CDI***** and the WEF CSI***** Grand Prix. Whew!

I love jumpers but don’t get to cover them often, so that was exciting. The WEF showgrounds just come alive at night with the crowds and literal-circus atmosphere.

The Showcase was so fun to have pretty much all of my media and photographer friends in one place, and I love being immersed in the dressage world too, mostly because the fashion inspires me! I got to interview Mark Todd at the Showcase, which I was slightly nervous for, but I had my friend Shelby from USEA there to keep me calm!

Red Hills is up next, another favorite because of the natural beauty of the park it’s held at, and the Carolina International at the Carolina Horse Park, which holds a lot of happy memories of my own riding.

I’ll be at The Fork in early April on my first trip to Tryon, then on to Rolex!