I’ve just finished off my whirlwind fall of travel, and I’m ready for a break! Since I last updated I’ve been to Plantation Field, Cincinnati, Dressage At Devon, Fair Hill and the Virginia Horse Trials.

Plantation was the first weekend where it really felt like fall. I covered it for the first time officially for COTH, and Phillip Dutton was a fitting winner at his hometown event.

I visited my brother, niece and sister-in-law in Cincinnati the following weekend, and it was kind of hot but I had a good time playing tourist and eating Skyline chili! The city is undergoing a lot of change, and my brother lives very close to downtown which is fun, plus they have a great view! 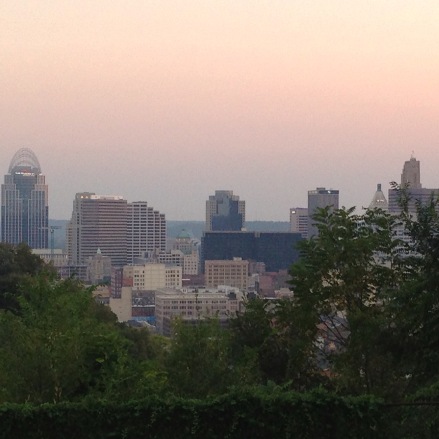 Dressage At Devon was up next and back to cold and rainy. I went to Devon a few times with my mom long ago, but I’d never been as a member of the media. It was fun to see some different faces than who we usually see in Wellington, even if the scores weren’t as high. I wrote a commentary for the magazine, which I’ve only ever done once before, about how I hope riders and spectators will continue to attend shows like Devon, or Morven Park, which was on the same weekend, because they’re so unique and historic.

My favorite event, Fair Hill, was up next, and while the weather was the driest and warmest it’s been in the 15 years I’ve been attending, it was unfortunately a little underwhelming this year. The entries were down, and Marilyn Little sparked a lot of controversy when her eventual winner RF Scandalous was seen with blood on her mouth on cross-country day.

After two of the most stressful weeks of my work life trying to write the story of the win while also reporting on what it meant to have a three-star national champion win with blood on her mouth, I hope what came out is a fair portrayal of what happened.

The “blood rule” was followed in theory, but there’s since been a lot of discussion about whether it’s right for the public image of the sport to allow a horse with visible blood to continue. I try to always see both sides of an argument, so I won’t weigh in, but I have to say I was disappointed with several things posted on the internet about how the media handled the incident.

It’s difficult when the sport is so small and everyone is friendly. We love feel good stories and stories of winners but we are journalists and have to report on the bad things as well. I feel like sometimes the riders get a little closed off when controversial things happen, but we’re just doing our jobs asking for the facts. If top riders want to get the press and be treated like celebrities, they need to realize that sometimes that means answering tough questions.

After Fair Hill I had a free weekend and took Oh So and Harley to a flat lesson with Heidi. She gave me some tips with Harley about keeping his walk and canter more forward and asking for more bend in all three gaits, so now I have some homework.

Oh So was very good, and we upped the work a little by adding in some canter/walk and walk/canter transitions.

I’m hoping we can get back to where we left off this spring and continue to work on those transitions and eventually get clean changes both directions.

He’s finally pretty much back to full flatwork and now we’re getting ready to pop over some jumps for the first time since June this week, so I’m excited!

Both boys were very well behaved during gale force winds with leaves hitting us all in the face and dust swirling around!

This past weekend we took Harley to the VA Horse Trials for some exposure and I brought Oh So along to ride in good footing. Both boys traveled well together and settled in. Harley was very professional for being 5 and they both thought they were living the life of luxury with Meghan and I tending to their every need.

I schooled Harley on Saturday and Meghan sat on Oh So. She’s only ridden in a dressage saddle a few times, so she was working on getting her balance and playing with some leg yielding, but she was pushing all of Oh So’s buttons by accident, and it was pretty funny. He would offer a turn on the forehand, haunches, leg yield or rein back and not get frustrated, so that was cool to see him play schoolmaster.

A lot of memories came flooding back, and I don’t know if I’ll ever compete him there again, but I’m glad we went.

Today I moved Oh So to a new farm just up the road from where he was in Waterford. I found a deal I couldn’t pass up where I’ll be able to afford two horses if I decide to get one in the spring. The only thing is he’ll be living out 24/7 so I’m pretty nervous about it , but he settled right into his paddock today and made friends with a mare across the fence line. He ate his dinner and was checking out some chickens when I left him, so I hope it goes well.

We won’t have an indoor, but we do have lights, so back to living the way we were at home. I’ll just have to pull out my winter breeches a bit sooner!

Harley is doing his first event this weekend on my (30th, gulp) birthday, and I’ve entered Oh So in a dressage show at Loch Moy the following weekend. It may be the end of the season, but I’m going to squeeze in what I can!

I’ve been thinking a lot about bucket list goals as I’ve been interviewing people this fall, and I came up with a list of my own. I still feel pretty aimless without having any competitions to look forward to, but here’s what I’ve come up with.

I think most of these will have to wait until my next horse, but I’m still holding out hope for Oh So!