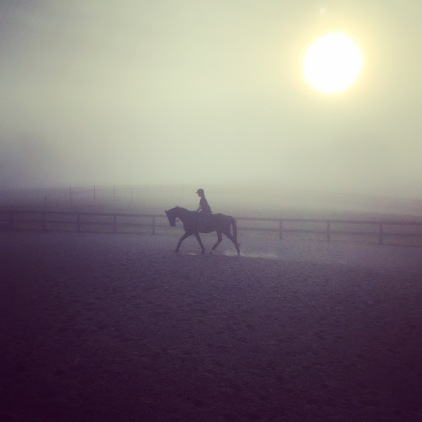 Life is back to normal finally after my trip to Rio! Oh So got the go ahead to start ramping up his work again, which is awesome, but we’re only adding 5 minutes of trot per week, so the going will be slow for awhile.

He flexed and palpated pretty well, so the vet decided not to do ultrasound and just told us to start adding trot. He also got his back injected in the areas where he has kissing spine, so hopefully that will help him feel a little better.

In the mean time I’ve been having a lot of fun riding my friend Meghan’s 5-year-old OTTB Harley, who is wise beyond his years.

He only raced twice and then was used to pony horses at the track, and while he’s very green in his body and education, he’s willing to take instruction, and he’s come along quickly over the last two months that I’ve been riding him a couple of times a week.

We’ve taken him off property to cross-country school three times and show jumped twice, and he keeps getting better. He’s pretty willing to jump anything, but sometimes it’s the other jumps on cross-country or the things going on outside the ring that catch his attention.

I’m really enjoying the process of working with a young horse again. I wasn’t sure I was ready to start over after Bear, but we’re slowly starting to trust each other, and it’s fun when it clicks for him.

On the flat he just needs to learn to take the contact forward, down and out. He’s been ridden in draw reins before, and he seemed afraid of the contact at first. Now he’s taking the bit tentatively, but still comes behind the vertical in trot on occasion. In canter he wants to raise his head and hollow his back, especially to the jumps, so we’re keeping them small right now while we work on his flatwork.

Meghan has felt a difference in him, which makes me feel confident that I’ve been doing the right thing despite no proper flat lessons and riding in my jump saddle!

The hope is to get him to a starter trial this fall. I don’t think the jumps will be the problem, just the activity, but we’ll keep working hard!

I’ve had a couple of weeks to think about Rio, and it’s coming a little more in to focus now that I’m not in the thick of it.

I watched all of the cross-country on the NBC replays when I got back to the U.S., and it really helped me understand the course better and how grueling it really was.

While I was out on course, I really had no idea what was going on because of the terrible announcing, so it helped to see it again.

Being there and focusing just on getting the best photos made it almost seem like another horse show until the medal ceremonies. I’ll admit I had a tear in my eye when the U.S. team got on the podium in dressage!

I wish I’d had more time to explore the city, but the day off I did have was amazing. I went to Sugarloaf Mountain and was the highest into the sky I think I’ve ever been. I’ve been to a lot of castles and mountain ranges in my life, but that was so high my legs were getting a little wobbly.

I had a ticket to see Christ the Redeemer that afternoon but the clouds came in, and I didn’t get the view I wanted. Ah well. Now I can say I’ve been there!

I spent the weekend at Plantation Field and now I’m off to Cincinnati to visit my brother and sister-in-law, see my niece and eat chili!

Next week is Dressage at Devon and then on to Fair Hill in the October.