It’s been a busy month as my travel schedule and show schedule has ramped up. I went to a combined test with Bear at Morningside on the 19th to do the novice, and it ended up being cold and miserable, but we survived!

His test was quite steady, but he was a little low in the poll in trot. We’ve been working on lots of bending on circles at home getting him to use his body, especially to the right, but sometimes he gets low as a result. We scored a 36, which I thought was too high, but oh well!

I didn’t get a chance to walk the whole show jumping course, but I know the ring well enough. We had the first rail down, which was a tall vertical. He was a little distracted going around the ring, and I let him get a bit flat, so he trailed his hind end. The round got better as it went on though, and by the triple combination at the end, he was jumping very nicely and I didn’t screw it up!

We wanted to go out on the hill after, but it started snowing, so those plans got scrapped! 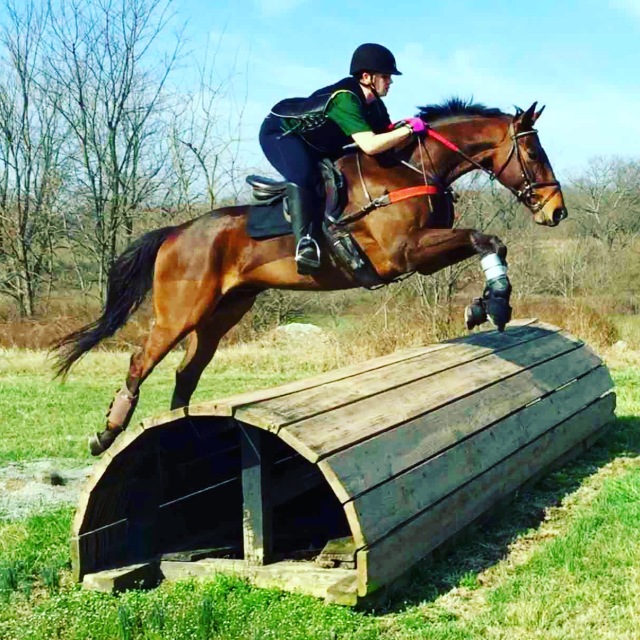 We did get a chance to go schooling the next week though at Gordonsdale, and we popped over some bigger stuff, as well as some drops into water and banks, which he was very brave about.

I headed off to Red Hills at the beginning of the month. It’s a really unique event in Tallahassee, Fla., where I think the non-horsey public ratio is higher than the eventing enthusiasts who attend. They redesigned the course this year, which I think the riders appreciated. Since it was my second time there, I had a better idea of where I wanted to shoot, and I was really happy with my photos.

The Carolina International at the Carolina Horse Park last weekend was my next stop for one of my favorite events to cover and ride at. It was a bit warm for the first two days, then kind of cold and dull for cross-country day, but I got tons of great photos. I really wish I could have packed my horses for the trip! 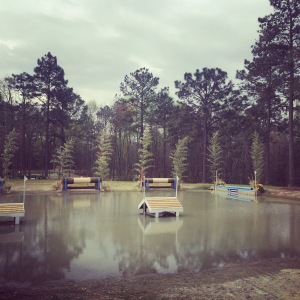 Bear went schooling again on Tuesday this week at Loch Moy. He’s never done their schooling course, and it’s been awhile since I’ve done it, but there was a ton of stuff to do on some decent hills, so we worked a lot on jumps up and down, as well as jumps before and after the water. He also did his first baby keyhole jump and ducked just like Oh So does!

What that school revealed is that he needs to get stronger cantering down the hills, and I need to sit in the correct balance and not let him get too much in my hand, which results in me taking my leg off as we approach a jump at the bottom of a hill.

We had our first event of the season this weekend at Morven Park, which is my hometown event now that I live literally five minutes away! 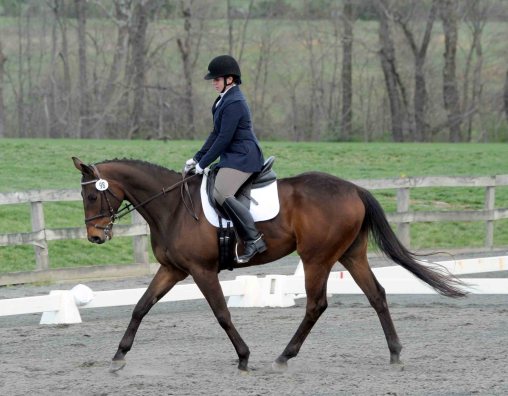 His dressage was very steady, and I worked to keep his poll up this time. We had one bobble in the free walk to medium walk transition where he anticipated, but otherwise, I worked on riding some shoulder fore on the long sides and tried to trot from canter as soon as I came off my circles to help him step under with his inside hind and make the transitions smoother. His final halt was a little more unbalanced than usual (i.e. not square), but he ended up with a 29.5 for first place!

The show jumping course was about as flowing as it could be for the shape and size of the ring at Morven, and he was feeling pretty good about himself! He was jumping around the fences nicely, but was a little bullish about his inside shoulder around the turns, and I was working on stepping into my outside stirrup and not touching the inside rein. 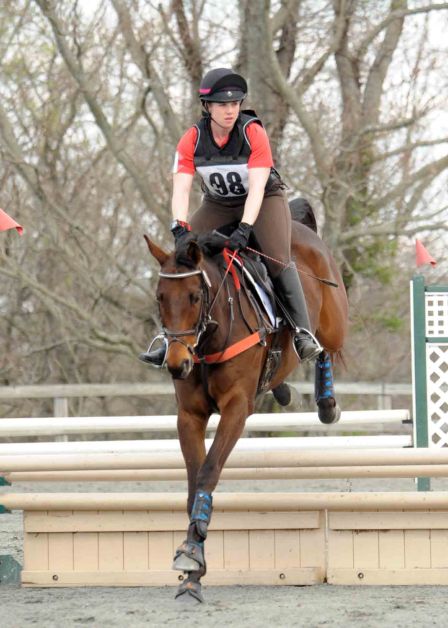 He jumped clear there and got pretty excited about going to the start box when we got down to cross-country. It’s fun that he’s starting to know the routine, even if he’s a little unsure of some of the fences sometimes.

The beginner novice course was on the “Big kids” side of the property this year, which gave it a lot more galloping space. I asked for a bit of a long one to the second fence and unfortunately set the tone for the next few jumps and the gallop stretches. He’s still learning to gallop in between the fences, and I had to work had to keep him from getting too much on his forehand, especially as I got about 10 strides away from the jumps, but the jumps themselves he was brave about. I couldn’t seem to find a rhythm until the end, but he was motoring along and finished confidently.

The water question was a big one with a log coming out, then straight down into a gully in the shadows, and he thought about it a little, but when I asked he went.

We finished well and ended up winning! He also won the TIP Award for beginner novice. I kind of wish we’d entered the novice, but we ended up with the better weather day, and I’m glad we got a confident run in. Now we continue to school and put the jumps up more as we look to MCTA possibly for a novice move up. 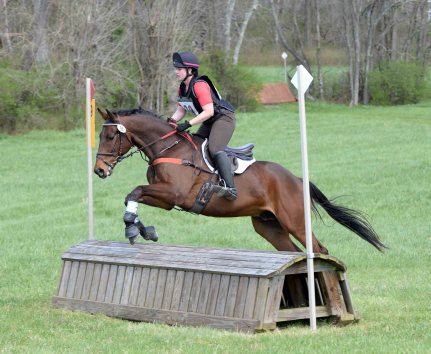 Oh So had his first jump lesson in a couple of weeks after he felt a little weird behind the saddle, right hind. I think it’s stifles, so he has an appointment with the vet this week. He’s felt fantastic this week though, so hopefully it’s just some maintenance, then we can get on with planning some cross-country schools and some shows with him.

I’m off to The Fork this weekend, then a few weeks until my first work trip to Rolex!