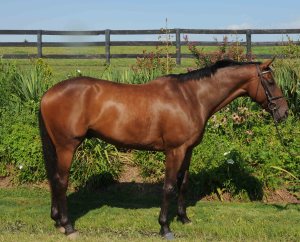 A few weeks ago I took Bear to an evening dressage show at Warrenton to do Training 1 and 2 in the dusty ring at the Warrenton Horse Show grounds. It’s been SO dry lately, we are just starving for rain, but despite the dust, the footing was OK for what we were doing.

Our first test was at dusk, and we hadn’t been out in awhile or ridden under the lights, so he was a little distracted in the warm up, but once we got into our work and then went into the ring, he was pretty focused.

His stretchy circle is obviously a work in progress at his age, but overall, the test felt very forward, almost too forward for me, but apparently that was him actually using himself and opening up his stride! I asked the judge at the end of the first test if it was too quick, and she said you can never be too forward, so I took that to heart for the next test.

Our downward transitions from trot to canter are also a work in progress. I just don’t have a feel for riding them correctly all the time, so sometimes he’ll stab the ground with his hind legs a bit, especially if it’s on the longside like in the tests. I find myself wanting to sit up and collect his canter a bit more like I would do with Oh So, but he misinterprets that and usually trots early. I’m trying to find a happy medium between riding them forward enough, but also trying to close my leg and give him the idea of rocking back and slowing his canter a bit.

I need to shorten my reins, it was pretty awful watching myself on video! The halts were pretty good, save for the last one in Test 2 where the tripped a bit, but overall, it was fun to get back out there. I’ve been traveling a lot this summer and then the ground has been so hard, we decided not to compete in August.

We’ve had two people try him so far, but no calls back unfortunately. He was very good for both though, so now I have a better idea of what he thinks of other rides besides me and my dressage trainer, Nicky!

In between people trying him we’ve had some pretty good jump lessons. We bumped the fences up to novice height a couple of weeks ago in a small ring where I had to ride with a bit more pace and he really stepped up to the plate.

On Sunday, we went to Morningside and jumped a bunch of cross-country exercises that had been set up in the ring by Leslie Law, who’d been there earlier in the week for a clinic.

We jumped a small arrowhead bending to a vertical and did a five-stride angled line of a vertical to an oxer.

Then we went on to a faux half coffin of a skinny barrel, bending four strides to a liverpool with a small rail on top, one stride to a vertical. He didn’t even bat an eye!

We finished off with a right corner, five strides to a left corner, a skinny bounce, and the grand finale, a bending line of training level difficulty over two skinny green rolltops that I was freaking out over.

They were pretty big and wide, but he just stepped across them and I felt no difference in his jump. It’s crazy to think about his potential if he barely made an effort over those. I thought for sure he’d peak at them too!

I’m at the point now with him where it’s time to start trusting him. He’s still a baby and might do baby things at times, but 95% of the time, he knows his job and doesn’t care whether I screw something up. We’re entered for our first novice at Marlborough when I get back from my vacation in France, so I’m hoping it’s a soft one!

Oh So has been on and off since I returned from the Pan Ams. His left front is doing well after we injected the digital flexor tendon sheath, but then his right hind all of a sudden had an issue. I got his stifles done and took an X-ray of the right stifle just in case, but there was nothing out of the ordinary. We’re trotting and doing a bit of canter now to let the injections take effect and if he’s still not better, we’ll look at the right hip, which he had injected last year. He’s never been diagnosed with anything back there, but the injection helped last year.

Each day that passes I just lose a little bit more hope that we’ll ever compete again. At this point, I just want him sound for flat work, but I really would like him to be able to jump, for both of our sanity!

I’m off on an adventure to France this coming week, so look for a blog when I get back! Then it’s full steam ahead with Marlborough, possibly taking photos at Plantation Field, AECs in Texas work trip, possibly shooting at Morven, competing at Maryland, a work trip to Fair Hill, moving myself to Leesburg and horses to Purcellville, and if Bear is still with me, finishing off the season at VA Horse Trials! Whew!