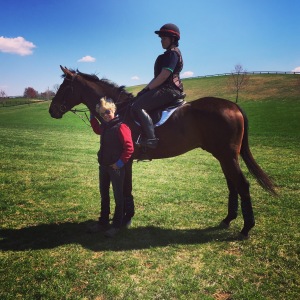 I was finally able to make it out to my first show of the season with Bear at Morningside last Saturday.

It was quite windy, but he settled right in when we got to the show. The warmup on the polo field was pretty sucky so we had to warm up on the track and in the tiny little warm up ring, which always bothers me, but he seemed just fine with it.

The person ahead of us scratched, so we were able to warm up near our ring on good footing. The test itself was pretty good for the first time out. He was a bit spooky near the judge’s stand because there was a tarp flapping on the side of the hut. He took exception to that during his right lead canter circle at C, but the judge was quite kind and gave us a 25.3, with a 9 on our final centerline!

I think the biggest thing to think of in the tests with him is to push him into the corners and really “show off” of those circles since it’s such a simple test. Our free walk and the transition to medium walk then trot needs some work and his final halt was square but not quite round and soft, so we’ll be working on those things before Loudoun. In watching myself, I’m still too active and trying to “push him along”. My heel was drawn up a bit and I was tipped forward in some photos, so I’ll be working on keeping a longer leg and a taller, more upright body position.

We went out on the hill after and had a short cross-country school. I’ll be taking him for a jump lesson tomorrow since my plans with Oh So have now changed.

I had a lovely jump school in the ring at Morningside on Sunday morning with Lisa and we went out on the hill to do a slow canter, Oh So’s first of the year. The footing wasn’t the best at some fences, so we literally jumped two jumps, the coffin and a small log into the water.

He had Monday off and was fooling around in the mud on Tuesday according to my mom. When I went to ride, he was most definitely off and I had the vet scheduled to come for chiropractic work, but we ended up doing a lameness exam instead. Sigh.

We isolated it to the left front and blocked it. He got better after we had blocked the lower fetlock/suspensory area and then ultrasounded. Thankfully there was nothing obvious on the ultrasound so we determined he probably tweaked his leg in the field. He’ll have a few days off and I’ll watch him go and decide what to do.

Unfortunately, I had planned on doing a combined test at Morningside this weekend, which will now not happen. I’m keeping my entry to Loudoun for now since we’re 10 days out and I’m hopeful, but really discouraged about the whole situation. I wish I had a real answer as to what it was, but now it’s a wait and see. Will I ever get to go to an event again?

He feels about as good as he’s ever been and his hind end feels really good too, so now I just cross my fingers and wait. And never speak out loud about any competition plans ever again.