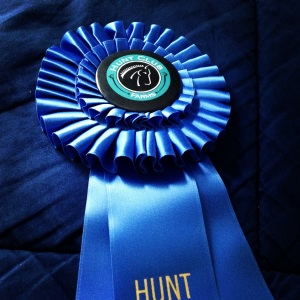 Another 5am wakeup call awaited me on Saturday for Bear’s second show, this time at Hunt Club Farm in Berryville, Va.

I’ll back up a bit to last weekend for a minute though, when we took him for his second cross-country schooling at Locochee Farm in Middleburg. They have a nice cross-country course with lots of baby logs and things, but first we warmed up in the ring over some jumps with flower boxes.

He was a bit distracted, being a new ring, and Lisa had us trot to a white panel with the farm name across it. He took one look as we approached and dove sideways, so I let him go look at it, then represented and he did it just fine.

The cross-country course is on a huge hill, but it flattens out at the top a bit where the water jump and banks are. He got to the top of the hill and was quite impressed with the view. We had a buddy with us who was more experienced, which was nice to have.

Lisa had me start by going back to the bottom of the hill and cantering up over three logs in a row, about five strides apart. He was a little all over the place, but we jumped them and did it a second time with better impulsion. It was very weird to be kicking, but he has no concept of jumping UP a hill, so that was a good exercise.

She had me canter him up a bank for the first time (this one was a double bank with a one stride) and again, it was a little awkward and crooked, but he tried. We walked down a single bank as well and followed our buddy into the water.

I was a bit disappointed in myself by the way I rode a three-stride combination of logs in a mock sunken road. I didn’t take him far enough away for a really long approach like Lisa wanted and he ran out at the first log as it crested a small hill. I almost fell off to one side, but we approached again with more distance and had a much better ride. Lesson learned: give the baby horse more distance than you think to approach a jump for the first time.

Lisa felt like we “blew his mind” a bit, not in a bad way, but that we introduced a lot of new things in a new venue with a lot of atmosphere. He handled it as well as he could have,  I just need to make sure to give him the benefit of the doubt and not start riding him like a horse with a lot of experience.

It’s just a different experience for me because Oh So has never questioned a jump, even during his first schoolings. He’s stopped at two cross-country fences in his life (and both were my fault), and although he was older when we started him, he just never says “no.” Bear is obviously very green and has less “life experience”, and he’s maybe a bit more timid right now, but as long as we take our time and teach him correctly, I have no doubt he’ll rise to the occasion.

In fact, I think he really did at the combined test yesterday. We decided to stay at the intro level (18″-2′) for one more show since he’d never been to this venue. We were the first (and only one) in our division and I got on about 45 minutes before our test. We had a nice area to warmup on footing and were able to ride around in the covered ring before our test since the judge was late.

It’s a strange feeling to be able to work a bit, let him walk on no contact, then pick him up and have him be pretty much the same. With Oh So, it’s all about keeping him working until it’s time to go in for our test.

I wasn’t as happy with this test, just because the indoor ring made it feel a little claustrophobic and I think we lost some impulsion. The footing was also a bit deep. We scored a 33, which is definitely an improvement from the first show. The judge just said she’d like to see a more steady contact, and I’m partly to blame for that since I tend to let my reins get long with him for some reason.

The show jumping course had quite a few bright jumps with fillers, and I walked him by a couple of spooky ones, anticipating a similar reaction to the one at Locochee, but he didn’t care and jumped everything confidently. We missed a couple of leads again and got a bit close to a couple of jumps, but we made it through! In the warmup out in the field, he was shaking his head and wanted to buck a little, so I think he’s really started to enjoy himself and that gave me a good feeling going into the ring.

After that, we went out to play on their cross-country course, but they really didn’t have any tiny jumps for us. They did have a good intro ditch though and we jumped that a few times, then did the actual riveted one and he was awesome.

Overall, it was a great experience. I think I’ll enter him at Morningside in a couple of weeks and do an intro test and a training level test with canter because Lisa will be out of town.

I’m off to Jersey Fresh this weekend, so fingers crossed it doesn’t rain!