It’s spring shopping season and I’ve picked up a few things for myself and my horses recently that I’m really loving. Here are a few of my favorite items so far.

Higher Standards Leather Care – I kept seeing a topic on the Chronicle Forums pop up about a user who started her own business making saddle soap. Someone in the office tried it when we wrote a story about her, and with plenty of rave reviews on the Forums, I decided to try some.

The soap is made of natural ingredients and you can choose your scent from rosemary mint, lavender vanilla, citrus ginger or unscented. I picked lavender vanilla, which is pleasant, but not over-powering. The 8oz jar, which will last me a really long time, comes with a nice sponge. I’ve barely made a dent so far, but it does clean my tack and leaves it moisturized. It’s not too sudsy, which is a pet peeve of mine. I hate when suds get in the holes of my bridles and stirrup leathers, so this is perfect!

Shedding block – I didn’t clip Oh So for the first time ever this spring and this is a miracle worker for getting all of his hair out. Just scrape off the hair, brush on the concrete aisle to rough up the edges, and repeat.

Back On Track Polo Wraps

As Oh So has come back into work, I decided to start using polo wraps for our trot work and decided to invest in a pair of Back On Track ones. Similar to the BOT blanket and hock boots I have, I’ve never really seen a night and day difference with the ceramic-infused fabric, but I figure, why not?

I tried the 12ft and they were way to long, so I went with 9ft, which are plenty for Oh So’s average leg. They claim to be stretchier than traditional wraps, but I’ve found they’re not because the edges are stitched. They need to be put on perfectly even and straight or you’ll get some looser spots. They stay on through our workout though and his legs are warm when we finish, which is a result of the ceramic fabric reflecting the heat back into the leg. 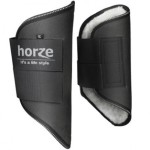 Ever since Oh So had a bad skin reaction from wearing neoprene boots last summer, I’ve been on the lookout for a different kind of turn out boot. I found these at Horze.com for a reasonable price and decided to try them for Bear first.

They’re lined with fleece and extremely lightweight. They have two velco straps, which are much easier than trying to do three hook and loop straps every morning. His legs were pretty dry after a few warm days outside, but I haven’t tested them in wet weather yet. They don’t have a big shock absorber on the inside like some splint boots have, but they’re thick enough that I think the trade-off for no neoprene is worth it. They run a little large, so I bought mediums for Oh So and Bear’s front legs. The large’s were very large.

Bear was in need of some durable bell boots for jumping so I tried these affordable no-turn boots from Horze.com. They’re made of a thick neoprene and also run a bit large. The double-lock velcro is very strong and they stay in place. They also feature ventilation holes to keep air flowing. So far, so good for riding and I think they would be a good choice for turn out too.