I was up bright and early at 4:30am on Sunday to compete at the Loudoun Hunt Pony Club Horse Trials at Morven Park with Oh So. I wasn’t feeling too confident about my jumping because of our previous performance at Morningside and a mediocre jump lesson on Friday, but I had a nice, short flat school on Saturday. I decided to warm him up for

dressage in mostly posting trot. He came out fairly relaxed and I didn’t make a lot of demands. We did touch base with the leg yields as they come in the test and some walk-trot transitions, as well as a little bit of sitting trot.

Once I started trotting around the ring, I sat the trot and he seemed to be focused. He made a really good effort in the lengthened trot (we got an 8!) and the leg yields were a little crooked, so we lost a couple of points there. I made a concerted effort to push out his free walk and he actually did stretch down consistently for a 7, and when I gathered him into medium walk, he was still a little tight, but held it together for the most part. He got a little unbalanced in the final halt, so he stepped backwards, which he’s never done. We ended up getting all 8’s on our collectives, which has never happened. We also got a nine on our half circle in canter going right and ended up with a 26.5 from a “purist” dressage judge. I was floored! We ended up in second place after

dressage and the third place person had a 32, so that was neat to have such a lead.

The show jumping course was sort of weird, starting on a curve, then making a circle back towards the start again. We had the second fence down, I think because I tipped a little left in the air and he touched it with his front foot.

He waited in the combinations well, but we also had a second fence down, an oxer after a long gallop on the diagonal. I started looking for a spot and we got a little close to it, so he had trouble making the width and had it down his a hind foot.

That was slightly disappointing, and in the end, the second rail cost us the win. The cross-country course was almost exactly the same as Morven, which was also disappointing. I’m ready for the course to be reversed. It hasn’t changed much in a few years.

I was riding a little backwards for some reason, so the second fence didn’t make for the best photo. He backed off nicely to the picture frame at 3 and did his usual duck, which always makes me laugh. I rode a little tentatively to the log on a lump combination and then again to the elephant trap.

I practiced using my whip at the drop into water, but I still tipped forward on landing like I 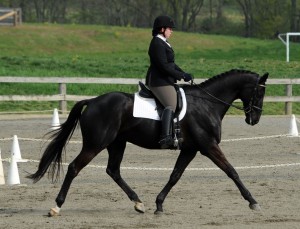 did last month. Luckily, we gathered our composure and got to the angled brushes better, but I feel like I could have slipped my reins more in the air.

One difference from last month was the bounce bank to the corner. I feel like I could have had a little more power to the up bank, because I got a little left behind the motion in the air, but I think it was also because I don’t ride a lot of questions like that, so I don’t have the feel for it.

We had a better, forward ride over the trekhener and the next couple of gallop fences and had a nice ride through the quarry at the top of the hill. We ended up finishing exactly on the optimum time. We’ve never made time before at prelim, so that was exciting. Had I not ridden backwards to a few fences, we would have had a little more breathing room.

We ended up in fourth place and got a nice set of polo wraps and a gift certificate from GRC for a farm call photo shoot. Maybe we’ll get some glamour shots done!

I’m not happy with the way I rode on cross-country, and I know part of it is my balance in my saddle. I’ve realized this spring that I’m going to have to start a quest for a new one, but the thought of it is daunting and I’m broke!

Next up for us is Fair Hill in three weeks. I’m excited to ride a course I’ve never done before, but slightly nervous because my trainer won’t be able to be there.

I’m also heading to Jersey Fresh next weekend to cover it for COTH, so it will be exciting to go for the first time in a few years.