Despite the crummy weather, I had a pretty good time at Morven Park this weekend. I tried to stay as relaxed as I could in dressage warmup, but he was holding in himself a little bit and once I started trotting around the ring, he tightened up. So much for that awesome, relaxed ride at the combined test. His trot work was tight, but we managed to get a couple 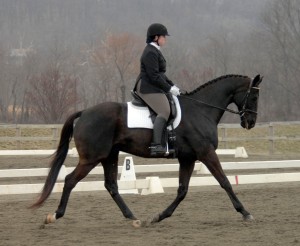 of eights in the canter work for a 34 and second place after dressage.

I was surprisingly not that nervous for show jumping, and it helped that I was at the end of the prelim division, so the warmup calmed down considerably by the time I went in the ring. We actually only jumped a few fences in the warmup, including a tall vertical and a lower oxer, and we were good to go.

I didn’t get a chance to walk the course, so I watched a few and went in. We ended up with one rail, fence 3. We stepped over fence 2 quietly, then went for what looked to be  a forward five strides, but he ended up getting there pretty quickly, and we had the front rail of the oxer down. There was a tight turn to fence 4, then five strides to set you up to an in and out that he ticked, but waited for the B element.

I got him a bit close to the next oxer, but we got that line better and he actually tried pretty hard in the triple too.

After greasing him up and checking our tack, we were off to cross-country. It had started raining again, but it wasn’t a heavy rain. After the first fence, he was off, and I pretty much had no control for the rest of the ride. I’m guessing it was because I didn’t take off the padded cover I had on the curb chain. He’d had a rub leftover from Southern Pines, and

I’d been riding with it on, but I think he really needed it on Sunday!

We had our usual funny jump over fence 3, a picture frame, where he always ducks. There was a new combination at 5ab, which was a log on a mound, four strides to a big table. He popped over that nicely and made the four easily, then he was off again across the field. My reins had started to get slippery and I barely got him back for the elephant trap at 6. That’s a fence that I remember seeing when I was younger and thinking it was huge. It’s a big slanted open timber fence with a ditch on the backside; very old school. We took it on a bit of an angle to get to the next fence, and he jumped it well, but pecked a bit on landing and I’m almost certain he pulled his left front shoe there.

Again, I had no control to the keyhole, but he jumped it efficiently and was off for another long gallop before a new, very wide table. He did that well, but I fell forward on landing. Luckily, I got situated in time for a turn to a drop into water. He jumped that confidently, but again, I was pitched forward a bit on landing. I had started to tire some by that point from fighting him and my slippery reins, which I knew was a bad sign.

Immediately after the water was a set of new jumps on an angle. We got a little close to the first one, but he popped out over the second one well and then really took off. I regained control enough to have a nice jump over the mushrooms before heading to the canyon.

I’d ridden the canyon combination terribly in the spring and he had backed off it due to his greeness, so I was determined to get a better ride. It kind of sucks you in with the giant boulders on either side that form a path, then up a hill and up a bank where you can’t see anything but sky.

He jumped big in, then we jumped up the bank well and popped over a skinny three strides later. The last major combination was at the quarry. We stepped in over a new log, then did four strides like a roller coaster to another log. I’ve never felt him power over a fence as much as I did over the B element. It felt like we were flying!

We ended up about 13 seconds over the time and slotted into third place. Had we been a little bit faster, we could have won since we were only 3 points off the leader. I’ve never been so exhausted after a course before, so I think we’ll be making sure the curb chain is ON next time.

I was really pleased though with both of us. For the first time, I’m really thinking that the

one-star at Virginia this fall wouldn’t be such a stretch. We’ve come out this year more confident in each other in both jumping phases and I know he can do the dressage, it just depends on if he wants to let the tension go that day or not.

I’m headed off to cover the The Fork CIC for The Chronicle this weekend in North Carolina, then the weekend after I’m planning on doing a CT at Morningside, then back to Morven for Loudoun Hunt Horse Trials.