I took Oh So up to the CDCTA combined test at Morven Park on Saturday for a little extra practice before Morven’s event in two weeks. The forecast was quite dire, calling for rain and temperatures in the 40’s, but we lucked out for most of the day. I had very late times (dressage at 1:54 and jumping at 4:15), which will probably be the only time this season I’ll have ride times in the afternoon, so it was nice to not have to rush in the morning.

I don’t say this often (or ever), but his dressage warmup was amazing. He was calm, quiet,

supple, and stretching, and I felt like I could have gone in and done my test with 20 minutes of warmup. Who is this horse and what has he done with my OTTB? We’d had a very good flat lesson on Thursday, and this was actually even better than that.

Unfortunately they were running a little behind, so I was probably on for 45 minutes, but he didn’t seem to mind. We trotted right in and the test itself was pretty good. Just from watching my video I could see a difference i his whole way of going. He had a lot more freedom in his shoulders and was just generally smooth. He did start to get a little low in his poll as we started going around the outside of the ring and I think it was just because he 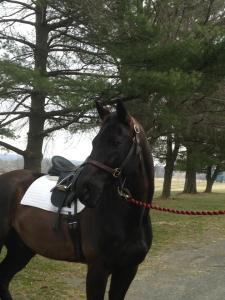 was maybe a little bit tired. He tends to get that way sometimes if we’ve had too long a warmup.

I had to work pretty hard during the test to keep his poll up, and we did score a couple of 6s due to that, but overall, he was very obedient. We got an 8 on our medium canter circle, our left leg yield, and my position (!), and even got a 7 on the weird ‘give the reins away at X’ that I hate in prelim test A. We ended up with a 31.8 and the judge seemed to love him when we chatted after the test.

A weather front came in as I was tacking up for show jumping and it suddenly went from about 50 to 40 and spitting rain, so that was unpleasant, but he didn’t seem to mind. The course was not huge, which can be expected at a schooling show, but it was still challenging enough. There were a couple of long canters to single fences, which tends to get me picking his stride down to nothing, so that was my big thing. But we both went in, I was pretty relaxed, and he was totally listening, and had a clear round! That kind of feels good. 🙂

He ticked a few, but the fact that he was waiting in between the lines and my position wasn’t horrible made it a good round. I had signed up for a second round, but decided I didn’t need it. We ended up second. 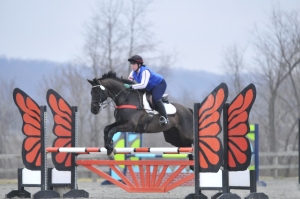 Now we’ll have a couple of quiet weeks before Morven at the end of the month. We’re currently getting more snow, so I’m hoping that will end soon and that maybe we’ll have a dry day for Morven. I can hope, right?