Southern Pines was a mixed bag, which I sort of expected since it was our first event of the year. We made it down on Friday at about 2pm and I took him for a hack before I did some flatwork, but he got so wound up on the hack, that I cut it short and worked him in the ring. It wasn’t my plan to work him for an hour, but he was so tight in his back and tense. I finally got him to stretch at the end, but it wasn’t the ride  was hoping for. 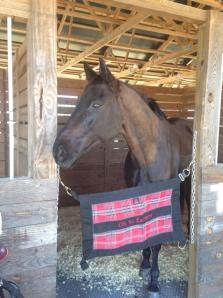 My warmup for my test the next day was better, but still tense. The warmup ring at Southern Pines is pretty chaotic, so he held it together, and tried to hold it together in the test. There were some ok moments, and not some so good moments. He had a good medium trot until he got a little unbalanced at X, but we scored a 7. His leg yield right is always a little weaker, and due to his tenseness, he didn’t cross over as well as he could have.

The free walk was a mess as usual, and we avoided an explosion, but it wasn’t pretty. We ended up with a 37.4 to be tied for tenth place. Yuck.

The show jumping course wasn’t causing many problems and actually set you up for success. Our warmup was not great. I was starting to pick a little bit and he was starting to pull on landing. We jumped the first fence on course beautifully, then we did a bending line of seven strides to an oxer. He got a little close to that one, but kept it up. He waited nicely for the skinny at three, then we came around and stepped in quietly to an two stride, but I

didn’t sit up fast enough to ‘whoa’ in between, so he had the front rail of the oxer down, then we did five strides to a vertical that he also had down because he didn’t ‘whoa’ and Itipped right a bit.

We came around to an oxer at six that was six strides to the triple. It was good for me because I tend to get to triples either too short or too long, but as we jumped the A oxer, I lost my right rein completely for some unknown reason, and we went down the line with only left rein. He did the best he could, but had the last part down. We took a longer turn to get to the next fence and incurred three time penalties. Oh well. Although the result doesn’t look good on paper, I was pleased with the way I rode and the way he jumped

most of the fences.

I was particularly nervous for cross-country on Sunday, probably because it was the first run of the season, but I also thought the course was quite big.

I was slightly out of control after the first fence, but he settled in to a rhythm well. We used the snaffle pelham, and I’m still not convinced it’s the right bit.

The combination at 4ab was a very tight two strides, so we stepped in quietly, but still had a slightly awkward jump out.

The coffin at 7 was quite big and somewhat downhill, so I made sure to keep my lower leg forward. He was a little bit backed off, but the ditch in the middle was small, so once we got over the first element, he skipped right through the rest. We had a beautiful jump over a trekehner at the bottom of the hill in the woods, and a decent ride through an angled five stride bending line.

I asked for a bit of a flyer to the table before the water, so we took a moment to get our turn, but he jumped nicely over the roll top and fit in a perfect six strides up the bank and out over another rolltop. I could have actually let him go a bit more and trusted him over the first roll top. I think I shortened him a little too much and didn’t ride as boldly as I could have.

After a few galloping fences, we got to the last combination, a corner, four strides to a skinny. He locked on to the corner well, but I didn’t use my inside left rein in as much of an opening manor as I could have, so he bobbled for a stride before he locked on to the skinny.

We finished about 20 seconds over time. I was happy with him, but didn’t think I rode as well as I could have. I needed to be less in my knee over the galloping fences. But for the first event of the season, I thought it was a good result. We ended up .2 points out of the ribbons. It was quite a competitive group down there because I think a lot of people have been competing for awhile, so I certainly wasn’t expecting to place well.

Next up is a combined test at Morven Park this weekend, then the Morven Park Horse Trials at the end of the month.

Here’s a couple of links to my most recent stories on COTH.

Sydney Conley Elliott Is A One-Woman Band At Advanced