My weekend was pretty non-stop and I’m finally getting a chance to relax a bit. It started with a 6am wakeup call for an 8:30 lesson in Middleburg with Oh So. We tried a new Pelham/Myler bit with a port, and I think we have a winner…for now! He was very respectful of it and we had a really good ride at a place we don’t go very often. They had some good little gymnastics and bending lines set up, so it was a nice change. 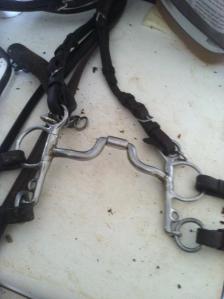 When I got home, it was off to ride Sam and work the minis. I don’t have a ton of time during the week to work the minis, so I try to work them on the weekends whenever possible. I had done a short flat lesson with Sam earlier in the week just to talk with my trainer about how he looked and to have her remind me of some points with my position, including my terrible left hand. As I anticipated, I’ve started to lean forward “at” him a bit, partly because I think his neck is so short compared to Oh So, but also because I think I sub-consciously don’t want to sit “into” him and stress him too much. She reminded me that I’d be doing him a disservice by not riding him correctly, so now I have some things to think about. I had my dad snap some photos on Saturday since it’s been awhile since I’ve seen myself on Sam.

Yesterday I went on assignment for The Chronicle to the Capital Challenge Horse Show at the Prince Georges Equestrian Center in Upper Marlborough, Md. I had competed there ages ago as a junior on a dressage team. As most people know, I’m not a fan of hunters, so I’m not too educated about them, although I’ve had it thoroughly explained to me in the office, so I think I’m starting to get it!

I was covering three equitation finals for juniors and amateurs at 3′ and 3’6″. I have to say I was impressed at the two finalists for the 3’6″ junior class, who had to come back and do an extra test involving cantering a course without stirrups, trotting a fence and counter cantering one, straight into a halt.

I was also there to practice shooting indoors, so you can check out my work here. I thought   I did an ok job, but I think I should have tried a 300mm fixed lens in addition to the 70-200mm one I had. It almost felt like I wasn’t at a horse show though. No mud, water or dust to slop through, no hills to climb, no blazing sun. Just perfectly coifed and clean kids sitting in the stands and watching after their rides while the grooms took the horses. Definitely different than eventing! The amateur I spoke to was quite good. She was a re-rider, getting back into the sport after 20 years away from it working for Estee Lauder. Now she’s starting her own company so she can have more time to ride. I like that idea! 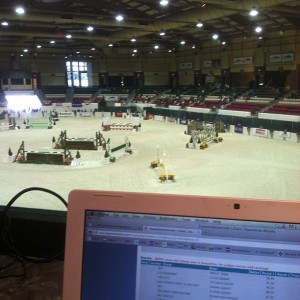 I have a flat lesson with Oh So today, then we’re jumping on Wednesday in preparation for Morven Park on Sunday. I’ll be without Lisa for the first time at an event, so I’m a bit nervous, but we’ll do our best. I’m planning on going up on Saturday to watch the advanced cross-country, then walking my own course.

We also got our prelim bronze medal in the mail the other day from USEA!