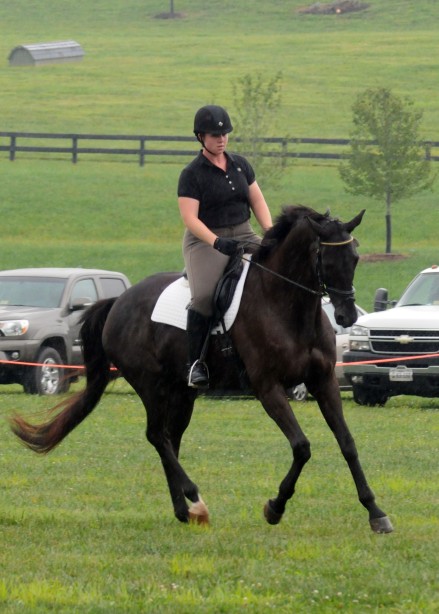 I was on my own yesterday for Morningside’s combined test since Lisa was at Loudoun horse trials. I had my co-worker/friend Megan with me to groom and she did a great job videoing too!

We started our dressage warmup in a steady but light rain that persisted until about the time we were done. We warmed up on the polo field first and they told me they were running a half hour early and that I should go, but I knew I didn’t have to go until my time. Even so, I felt a bit rushed. I went over to the ring when they told me I had two horses to go, but when I got there, it was more like four or five. Not good for Oh So. There wasn’t really a decent place to warmup until you were on deck, so I just walked him back and forth, but I could feel him start to get tense and grind his teeth.

When it was our time to go in the ring, his trot had diminished and I was having a hard time sitting because his back was getting tight. Somehow we made it through the test with only one explosion after the free walk to medium walk. He got his really tight trot going and around E, right as we were supposed to turn onto the centerline and finish, I “sat him down” by making him halt. Enough is enough with that. Luckily it hasn’t happened for awhile, I actually thought we were over the tension during that sequence, but since it was a schooling show, I felt like I could make that correction. The judge even told me it was a good correction at the end of the test. She also said she liked the canter work, and I guess that more than made up for the trot tension because we got a 29.

I think we’re at the point now where we can hid tension pretty well, but he just bottles it up and wants to explode a bit after the free walk. I also realized that he really only needs 35 minutes or so, otherwise I lose him. Either way, I guess it was good for him to deal with the delay, but it makes me not want to do  dressage test there anymore unless I can warm up close to the ring and keep the momentum and go straight in.

We had quite a long wait until show jumping. I walked the course at training height and watched a few before I went to get ready. Again, we had to warm up on the polo field, then go over to the ring where they had two jumps set up on the track. It’s a bit deep on the track, so I just popped over the cross-rail and a vertical before heading in to the ring.

Our first round was actually clear, which was really exciting. I think I like the pelham now for competitions. I popped him a few times before each fence as needed and he got off my hand and had a better jump. He waited for me in the one stride to five stride line and even the triple. I had signed up for a second round, and in hindsight, should have quit while I was ahead, but I think it was good for us to go in again just to get the feel of the competition atmosphere.

We had two rails down in the second round. He fussed a bit before fence 2 and had it down, then didn’t wait as well for me in the triple and had the last part down. I think he just figured it out a bit, which is why we don’t often jump lines more than once or twice at home. I just need to really make the effort to whoa him, even if it gets ugly, in those lines.

So we ended up in second place, but I was just pleased with the clear round and to say I did it by myself without a coach. This week I’m traveling to the American Eventing Championships in Georgia for COTH. It will be my first time at Chatt Hills, so I’m excited. Off to pack!