Yesterday I had the opportunity to visit Will Coleman’s Tivoli Farm in Gordonsville, Va.for a Behind Barn Doors feature for The Chronicle. I just missed him as he decided to leave a

day early for Richland Park, but I was able to get the photos I needed. His place was about 5 mins. from James Madison’s Montpelier. I got to meet Twizzel, fresh off his trip to the Olympics, and even saw Will’s Olympic completion ribbon.

His working student was able to show me around a bit, but I’ll be getting some more information on the facility next week. I had to wait for the fog to lift, but once it did, I got some nice shots. Overall, I thought it was a very workmanlike eventing barn; no gold fittings, but clean, efficient and perfect for an eventer. I was surprised he didn’t have an indoor, but eventers are tough, right? He had a long, uphill gallop track which was pretty neat too, and he’s only an hour and 15 mins. from me. Could a lesson be in the works? I think it would be fun.

I won’t spoil the rest, so look out for the photo spread in the Eventing Issue of COTH, out Oct. 8.

I’ve also been meaning to post a couple of things. First, I got my photo in COTH for the first time! It was a couple of months ago, but still kind of cool, right? Now I just need to win again!

Also, I forgot to upload a jpg version of my recent review of the Horseware Ice-Vibe Boots that ran in the Chronicle Connection. Next up, I’ve got Kentucky Horsewear D3o Cross-country boots to try! 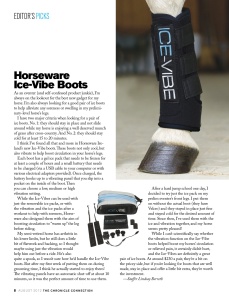