So the last week has been kind of a blur. I took Oh So to a combined test at Loch Moy on Sunday with mixed results. His dressage was very good. We were able to warm up right near our ring so we worked our way over when it was time for our test. We did Prelim test A, which at first I didn’t like, but it actually rode really well. He had good leg yields and good canter work, but yet again had a bit of an explosion after the free walk. We got a 35, which was respectable.

The jumping was a bit rough, although we had a great warmup. I think I got in the ring and he was a little too quiet, which is unusual, and got a bit behind my leg. I wasn’t finding my distances and both rounds were just overall inconsistent. 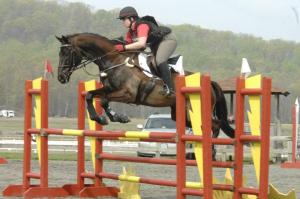 This past weekend we competed at Morven Park prelim. My times were really close, so I barely had time to think! The warmup was a bit chaotic as it can be there, but we stayed pretty focused. I thought our test was average and the leg yields weren’t as strong as they can be. We ended up with a lot of 7’s and 8’s for a 30.0. And we were in first after dressage against a lot of professionals and fancy warmbloods! The judge actually said our test was consistent, which is not always the case.

I barely had time to walk my show jumping course before I had to ride it. It was in the smaller ring, but for whatever reason, I actually rode forward and most of the course was really good. As I came to the final triple combination, I thought to myself, “Wow, we’re clear so far, what will I do to mess this up?”. Well, we took a big spot in and paid the price by having the last rail down. That kind of rattled me, so I missed my turn to the final oxer and had to circle and jump it. Whoops! So we ended up with an unnecessary 4 faults plus 3 time faults.

The cross-country was really big and tough. It was combination after combination, including a lot of things he’s never seen before. Fence 4A was an angled, bending line of skinny cabins which we got a bit close to, but he was honest out. Fence 6 was a huge drop with a big chevron four strides later. It was definitely the biggest drop we’ve ever done and he hesitated, but landed and got the four strides easily.

There was a keyhole that he didn’t bat an eyelash at and plenty of square tables that would usually bother me, but there was so much else to think about on the course. The water jump was a big log, two strides to a log on top of a drop into water, then a skinny out. He jumped the first part well, but hesitated as he was dropping into the water. I was a bit in my knees as I tend to get, and he bumped me loose as he brought his stifles down too early. I righted myself though and we made it out over the skinny, but he did scrape his stifles enough to bleed a little. Grease next time I think!

There was a tough combination called The Canyon that was almost like a tunnel into the woods, surrounded by rocks, then up a steep bank and two strides over a log. He was really hesitant to the first part and I dropped my crop. The bank up was good, but he almost stopped dead on top and was a little awkward over the log out.

The corner was at a tough angle, but he jumped it honestly and he balked a bit at the trekehener. The last combination was The Quarry; a log, straight down to a ditch and the up to a skinny. He usually has no problem with ditches, but definitely was taken aback by the question. We finished with two really nice jumps over some tables. We were about 30 seconds over the time, but I wasn’t concerned with that.

We ended up 10th. Overall, I think he handled it well. I wish my position had been a little more solid to help him through some of the stickier combinations. He definitely felt green again and I think he had his ego knocked down a notch. Training level was easy, so he actually has to work a bit!

I got on him yesterday and did some walk and trot. When I tried to canter left, he was very lame from behind. I’m putting him back on bute and giving him a few more days off with some walking under saddle possibly. Luckily we have a break from competition until after I go to Rolex, so I hope he feels better soon. If he’s not better by the weekend, I might have to get x-rays.