Yesterday was a real eye-opener for me regarding Oh So. I ended up not going to the dressage show on Sunday because we were having too many issues at home on the flat to warrant it (plus my ride time was 7pm! Not in the winter, thanks). We went down to Woodside Equine Clinic to see Dr. Scott Anderson, who’s well-known for his lameness and chiropractic expertise. I’d seen him years before with my Hanoverian mare and a few times with Sam, but for the most part I’ve been going to Morven Park.

His first thought was that Oh So was very sensitive to his stomach points (an 8 out of 10) and he recommended scoping for ulcers. I’d had Oh So scoped about two years after I got him and he had some slight scarring, but the vet at the time just recommended a treatment of Gastrogard and a daily supplement (which he’s been on ever since). So, we’re going back for the scope on Monday so I can fast him for 12 hours before.

We did some flexion tests next and he was about a 2/5 on his hocks and stifles. I haven’t been able to develop a trained eye to these types of exams because with Sam, the flexion tests are always pretty horrifying. With Oh So, he just took a few stutter/short steps, but wasn’t obviously lame. Scott recommended hock and stifle injections. He thought that the stifles could be a one-time thing, but that they hocks had some obvious discomfort and projected that he might need them done once a year (we’ll see how he does of course, since this is his first time having joint injections). I think that explains a lot about his flatwork. I knew he was uncomfortable somewhere. It won’t fix his tension totally, but I think this is the right step to making him feel better.

I guess I’m finally realizing that he’s almost 12. He was seven when I got him off the track, and I have to remember that even though he’s only been competing for four years, he raced for a lot longer and has to have had some wear and tear. I just didn’t think I’d be starting with injections so soon. It’s maintenance though, not pain management, which is where it differs from Sam.

Other than that, I’m having a pretty good week. I have some cool freelancing jobs in the works. I got the opportunity to work with Eventing UK as a U.S. eventing correspondent (thanks Leslie Threlkeld!) and I’m also going to be doing some more work with the USEA’s 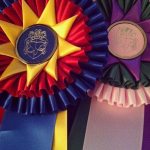 magazine. I’m starting with a book review column, so if you have any good ideas for books, let me know! It’s geared towards eventers, but I’m looking at everything from biographies to dressage to horse care. The Chronicle also asked me to do some more stories, so I’m really excited. It means a lot that they think of me and have faith in my writing.

I also got some more cool ribbons in the mail from CDCTA. I was training amateur champion and got fifth in prelim amateur. I’m just waiting for my Area II ribbon now and the 2011 season will be complete!