I’m finally getting around to writing this after a really exhausting string of days. It all started last Friday when I had a saddlefitter come out to look at Oh So’s saddles. We’ve been trying to save money this spring and the saddlefitter who originally fit both horses has gotten quite expensive. I haven’t had her out for over a year, so I found a local guy who was cheaper. He worked on Sam’s saddles a couple of weeks ago and we got rained out of doing Oh So.

He thought the Albion dressage saddle was not a god fit, but was able to make some changes to it. He said the stirrup bar was putting too much pressure in one spot on Oh So’s back. He also thought the mouth of the tree was a little weird for a TB. But he was able to make it work.

The minute he put the Albion jump saddle on, he said it was an awful fit and I shouldn’t ride in it again because when girthed, the back panels did not lay flat on his back and again, the stirrup area was putting uneven pressure on his back. I was shocked to say the least! Both of these saddles were custom fit for Oh So in 2008 and the dressage saddle has a changeable tree system because we anticipated he would change shape. So now I’m thoroughly confused. It’s not to say that the original saddlefitter wouldn’t like the fit of the jump saddle today, but my guess is that she’d be able to flock it a bit and it would work. But to have someone say it doesn’t fit at all is crazy to me. Everything he said sounded right, but I just don’t know who to believe. He’s definitely knowledgeable, if not over-analytical. It was a lot of information to take in.

So, we shimmed the dressage saddle and next week my dressage trainer has a saddlefitter friend who’s going to give me a third opinion. From there, I’ll decide if I need to go saddle shopping and if I’ll continue to use this new guy. The frustrating thing is, Oh So and Sam (he was not crazy about Sam’s saddles either) never give me signs that the saddles are bothering them. How was I to ever know that Oh So’s are poorly fit? The masseuse and chiropractor never have any comments about Oh So’s back. Sam is usually back sore, but I always attributed that to his hock pain and age, plus the saddles didn’t need too much work. So we’ll see where that leads me. 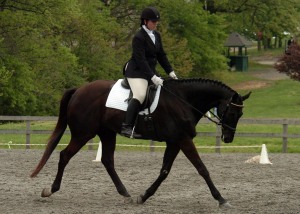 Sam was also lame on Friday and seemed really off on his right front on Monday. The farrier checked him out today and didn’t find anything wrong, so I’ll lunge him when I get home and see what happens.

That took up all of my Friday and I worked at Loudon on Saturday shooting Novice and Prelim cross-country. It was a beautiful day and I got sunburned, but I checked out some of the prelim cross-country and it looked do-able as a first prelim. I wish I could go back for the schooling day, but we have MCTA this weekend.

Sunday I was up early to braid and left early so I could let Oh So “hang” around his dressage ring. Once I got on, he was pretty balled up and nervous, which he hasn’t been in awhile. Maybe it’s because we’ve been in the indoor for the last few shows. I pushed his trot and canter on to “push the tension out” and it seemed to work. I learned that strategy from the dressage trainer I’ve been working with this winter. He finally came back to me and we had some good trot/canter transitions  and lengthenings. We kept the momentum going into the arena and had a decently relaxed test.

Towards the end of my warm up he was getting a bit low in the poll. I’m not sure why he does it, probably boredom or tiredness, although it’s hard to imagine him getting tired. He dipped down a few times in the trot work, and the judge really dinged us for it.

The dreaded free walk to medium walk to trot to canter sequence went very well and he gave a good effort in the stretchy circle and the trot lengthening. We ended up with a 39.1, which was surprising. We got more fives than usual and his collectives were all sixes except gaits was a seven. It was discouraging, but I know personally it was a good test. We were fifth after dressage. 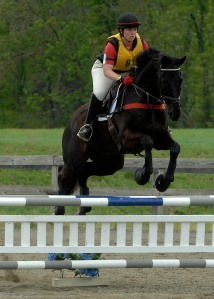 Show jumping warm up featured a few really good jumps. I always struggle to keep my pace up. I think I’m just concentrating on so many other things. The course had a skinny plank that people were having down and I did too. I’m not sure why, but I had a bran fart right in front of it and got too short and just sat there. He also had an odd rail at three. I needed a little more pace through the turn, but we got to it alright and the rail didn’t fall until we were almost away from the jump.

There was a triple combination too, which we’ve never had at training. I used to do them with Sam when we were going training, but I haven’t seen one with Oh So until now. He jumped it perfectly clear which was awesome. So, besides rider error, it was good. It’s just frustrating that we literally never have rails down at home, only at shows.

The cross-country course was fairly straightforward. There was a drop into water and a log out, a half coffin, bank up and two stride combination. I feel like he’s so ready for prelim, but I cannot seem to get a good feel over single fences. I stuffed him to one big oxer and got a couple of big spots to others. I’m not sure what I’m doing wrong. I try to think of bringing my chin and head up before the fence and stay out of my knees. It doesn’t help that he’s fussy when we gallop a lot of the time. We just need to keep practicing the right pace and galloping up and down hills.

We ended up sixth, which is where we ended up at our last event! We’re off to MCTA this weekend. I’m dreading early times and the long drive, but I haven’t been there since I did prelim with Sam a few years ago. It’s a beautiful place, but dressage and show jumping is on grass, so I hope we don’t get anymore rain!