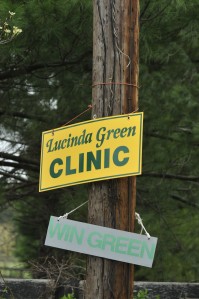 Better late then never! I’ve just been so busy all week that I haven’t had time to write this. Without further ado…

Eventers from all over Area II came to dust off the winter cobwebs at Lucinda Green’s annual clinic at Wingreen Farm in Rhoadesville, Va., April 11-12. The six-time Badminton winner and former World and European Eventing Champion taught four groups of riders how to ride cross-country safely by learning techniques over show jumps the first day, then taking what they learned to the cross-country course the second day. 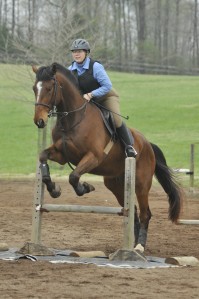 The groups started out by warming up on their own over small obstacles including a corner, points, skinnies, barrels and a tarp on the ground.

Once warmed up, Lucinda defined her three F’s; focus, footwork and fun. You want to get your horse to see what he’s doing at the earliest possible moment and you want him to be clever with his feet so he can get himself out of trouble. She reminded everyone that the whole reason we do this is because we love it, even though it often gets hidden beneath the frustrations and things that go wrong. Fun is also important for the horse because a horse that is enjoying himself will give you his all.

Then she introduced the concept of “the tube”. By thinking of putting your horse in a tube between your legs, you’re able to easily tell him where you want him to go, or focus. If you think of your calves being attached to his eyes by an invisible line, you’ve got you’re your tube.

Your eyes are also important when trying to focus your horse. “Eye” for intention was an easy-to-remember phrase Lucinda suggested. She told riders about her “Pyramid of focus”, with your eyes at the top of the pyramid and your legs and hands equally important at the base.

Before starting the session, she warned that for the next two hours, there would be “quite a lot of awkwardness. It’s not one of those clinics that you leave feeling everything’s smooth, beautiful and wonderful. You need to know how to do those, but as you well know, that’s not real life. Real life is full of bumps. You’re going to meet real life here.”

The first exercise was walking and trotting over the tarp. It caused a few problems for some of the greener horses in the group. Using a lead and allowing them to lower their head and neck helped them learn to be confident walking over it and eventually jumping a fence over it.

Lucinda said that sometimes if a horse is in a severe bit with their head and neck in a more fixed position, they have trouble inspecting the fence and might have a bad jump or stop. That’s why it’s important that green horses especially need to be allowed to inspect a fence by lowering their head and neck. She had riders put their hands forward and let their horses look at the tarp, but not stop. She insisted that if a horse refuses a fence, never turn him around. Back him up about three or four meters so he continues to keep his eye on the obstacle, then re-present. 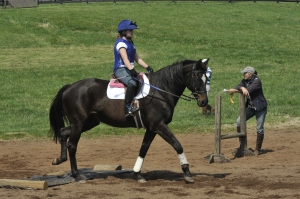 The horses easily learned the footwork Lucinda emphasized at the beginning of the session by jumping bending lines of skinnies, barrels, a jump on top of the tarp, and a small skinny log in and out of the arena. Even though the jumps were less than two feet tall, the horses learned to jump narrow, spooky fences and keep going. Practicing a lot of jumps in succession replicated real life cross-country circumstances.

By the second day, horses and riders were confidently jumping up and down banks, over ditches, into and out of water and over skinnies because of the work they put in the day before. Riders were communicating clearly to their horses where they wanted them to go and their own reactions were sharper. As a result, the horses had their footwork down, the riders were feeling “the tube” and each pair was having fun!

“It doesn’t matter what you look like; ugly is good. Cross-country is all about learning and practicing to survive in many different balances. You never can be sure about being in the perfect balance.”

“Everytime he does something well, make sure he realizes it. Horses know when you’re pleased with them. They like to please us.”

“Feel the tube! Attach your legs to his eyeballs.” 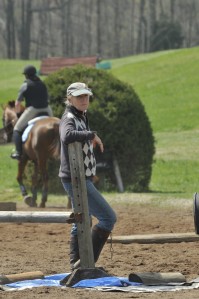 “Practice imperfection rather than perfection.”

“I believe in training horses that you should never let them stop looking at the fence you’re trying to jump, because as soon as you turn away, you’ve lost really valuable looking time and they’ve won.”

“Just get out there and do it.”