Well, Morven was definitely one to remember! The forecast only called for a 30% chance of showers, but we got two insane hailstorms instead. I got there pretty early to let Oh So off the trailer while I walked stadium and cross-country. He seemed to settle right in and enjoyed munching on grass. He even behaved for my mom, who doesn’t like to handle him. I rode dressage in the indoor, which was perfect, since we’ve done our last two dressage shows there. I think it definitely made me more relaxed. He honestly didn’t need the hour that I’ve been doing for warm up. My coach (Lisa) thought I should do an hour in case he needed to be”worked down”. So after about 30 minutes, I was trotting and cantering around wondering how else I could improve him, which I guess it a good thing, but it’s exhausting! He’s naturally very fit, so I don’t think it bothered him, but I did worry that the longer I went, the more he might get anxious to be done.

I did some trot and canter lengthenings, and some spiraling in and out on a circle in trot. I also did some trot-canter transitions, which were ll very obedient. He held it together mentally and when we went in to the ring to trot around before the bell, he tensed up a bit. I took a couple of circle on the bottom end and got him back enough. Most of the test was very good. He was steady and really listened to me. His canter-trot transitions on the longside are getting very obedient, even at home. His free walk needed more head and neck stretch, but he still got a 7. He was good in the transition back to medium walk and even to trot. But yet again, he flipped his head badly in the right canter transition. I’ve been avoiding practicing that sequence at home in fear that he’ll anticipate more, but I think I actually need to drill it at home now until it becomes so boring, he won’t care. It’s also a case of him listening to me, so maybe I could trot at A, then go back to walk at F instead of canter.

He actually tried in the stretchy circle after the canter lengthening, and even though it only got a 6, the fact that he was loose and supple enough, and in balance, was good for him. After looking at my video, he actually looked a little slow in the canter, so I think more impulsion is in order next time. I think I get too comfortable with him when he’s relaxed and I need to push more. We only got 5’s on the canter lengthenings. We ended up with a 35.9, good enough for fourth after dressage. 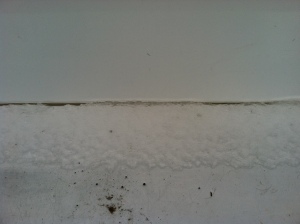 As I was getting ready for show jumping, it started to rain, then hailed! The ice was about the size of peas. We got him on the trailer quickly, but didn’t close the tackroom door fast enough so everything got wet! As a result, I felt a bit rushed in the show jumping warmup. I rode backwards to a couple of jumps, but sorted it out in time. The course was set up in the huge ring where they usually fit three dressage rings in, so it rode very forward. It had some good bending lines that were related, which I don’t often see. Usually it’s just five stride lines and in and outs and jumps on the short side. There was a two stride oxer to vertical and a one stride oxer to vertical which he did really well. We had one rail down that was my fault because I rode backwards. It was a good three strides right off the rail, but he was a bit strong in the snaffle, so I rode backwards in an effort to get him to listen to me. Overall, I learned that we can’t jump in the snaffle at shows, no matter how well he goes in it at home.

The cross-country was already mucky before we got there, and after the first hail storm, it got quite deep. I guess that’s what’s to be expected at Morven in the spring. He’s actually pretty good at galloping and jumping in the mud though. He seemed aware of the deep footing, but kept jumping anyways. The time and speed was quite generous. I was a bit underpaced the whole time, even though we made the time with 10 seconds to spare. The first couple of fences were a little short, but he jumped the trekhener at 4 well. The log on a lump at 5 was small, and he could have stepped over it, but he kind of landed in a heap on the other side after a big jump. Fence 6 was a tough quarry, which I’ve never seen on the training course. It caught a lot of people out because it was slick on landing from the first element. It was four strides to a log. He jumped in well, organized his feet, and made a big effort over the B element. I really need to learn how to slip my reins and let my hips come forward and my upper body come back though.

There was a step up to a roll top and a big table which he did well. He kind of landed all four feet at the same time off the steps down, even though we’ve done them before. I probably should have trotted off instead. The water was at the end of the course. It was a log landing on bluestone, through the water then out over a log on a mound. He jumped boldly and hugely out. The photos are crazy. (I’ll have those up soon) As I was taking my studs out, it hailed again! We ended up in sixth in training rider. Someday I’ll finish on my dressage score.

Overall, I need to have more pace on cross-country, try 45 minutes warm up for dressage, and try to find a different bit for show jumping. He’s doing what he needs to do, but I felt like we should have had a cross-country school over training level stuff before. I felt like I was a bit rusty and he needed some more refinement.

I worked for GRC yesterday and shot show jumping. The prelim rode quite well. It was good for me to watch a bunch of riders go because I need to get comfortable with that height.

Today, it’s going to be 86 degrees, which is odd considering it was about 45 on Saturday. It’s Virginia. I clipped the minis this morning and lunged Oh So for the first time in many months. The last time I did, he was pretty awful, falling in on the circle and speeding up. He was very good today, staying out on the circle, doing walk-trot transitions and spiraling in and out. I only did about 15 minutes and didn’t try canter. I like to be able to see him from the ground sometimes and see how he recovers from his events, so I was glad a cooperated. He’s getting to be quite big and muscle-y.