Well, Rubicon did not go as I had planned. Our dressage warm up was somewhat tense. I think he’s ready to go back to longer than 25 minutes now. He needs to work through his issues and really get his hind legs engaged. The test itself scored a 40, which seems to be our magic number this year. But the judge was much kinder. We got 7’s and 8’s on our canter work, and the first half of the test was

actually alright. But yet again, after the free walk, he feels the need to stop working and lose focus. According to my coach, it’s time to say no. Even if it has to get ugly for a few strides, he needs to know that when he’s in the ring, it’s dressage time. On a positive note, his halt was perfect!

Show jumping was just plain awful. He didn’t even feel like my horse. He had four rails down! Of course, a lot of people were having rails, but that was just unacceptable for him. He was not wanting to steer, and kept landing on the wrong lead, or swapping to the wrong lead. Three of the rails were just him not being careful. The other we were both out of balance and he came to it almost sideways because he was on the wrong lead.

Cross-country was pretty good. Again, the steering issue came up. After the third fence, he didn’t want to turn sharply to the down bank combination, so that was

a bit ugly. But most of the jumps were met out of stride. He did both huge tables perfectly and was brave to the water, even though he landed hind feet first off the bank. He probably did the corner the best of all of them. He really locked on, and that’s exactly what I want for that type of question.

After much analyzing and discussion (that’s my problem, I dissect things too much!), my coach said that Oh So is now in his unruly teenager phase. He loves to jump so much, and is so brave, that he’s not as careful. Sometimes he forgets I’m there. In the dressage, when decides after the free walk that he’s done. So we’re taking a step back over the winter and really working on things. We had a good lesson this week where we just put a canter pole in front of different oxers to make him wait, and give me to opportunity to worry about myself and not him so much. That was one of the main problems with our show jumping at Rubicon. When we’re fighting each other, we get bad spots and I don’t ride as well because I don’t have those last few strides before the fence to go through the checklist in my head of things about my position.

As far as the dressage, I’m going to take a few lessons from another dressage judge, as well as my regular dressage trainer. I’m going to really work on my sitting trot and get after him more. He and I will both have to deal with the consequences of that. He’ll be fussy for a bit, but then he’ll give it up. 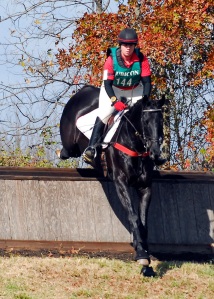 I’m taking both horses to a schooling show next weekend at Morven Park. I’m going to try training level USDF dressage tests for Oh So. I figure we’ll have more room in the larger ring, and we need to get out of the same pattern we’ve been doing all season (free walk, medium walk to the right, right lead canter).

I’m taking Sam out cross country schooling tomorrow at Kelly’s Ford. I think he’ll enjoy it. We also finally got arena lights installed, so I’ve been riding at night. Both boys seemed to adapt to riding in the dark pretty easily.