It is hot here in Virginia. The heat will finally break on Friday, just in time for the Maryland Horse trials. I’m competing Oh So on Sunday. I took him to a new schooling facility called Morningside on Tuesday where we were able to jump around a stadium course in a nice arena, then go out and jump a few cross country fences. They had a nice coffin, and a really good water complex, where we were able to drop down a bank and go back up it. He did the down bank well the first time, after we had done a few galloping fences first. But when I went back to the bank again to have him step down, he stopped. He did it well a few more times, but it made me see that when he is “on course”, he will jump anything. He sort of leaps, then looks. But during schooling, when he has to slow down and think about things more, he will look before he leaps. That’s alright, schooling things multiple times is usually for me to work on my position.

This week, I have to ride through my test a few times with him. Sam is having an easy week because it’s so hot. I had a great jump school on Monday. I set up a bounce exercise from Jimmy Wofford’s gymnastics book, and he really jumped everything well.

Tomorrow, I’m taking the first step towards my future! I have an interview for an internship position at Northern Virginia magazine. I have to drive up to Tyson’s Corner, but the interview is at 11, so hopefully I can avoid some traffic.

That will be good practice for my interview on Friday at The Chronicle of the Horse. I can’t believe I got the interview. It all happened very fast last week. So, I’ll do the best I can and see how it goes.

Saturday I have to drive up to Loch Moy to walk my course. I have fairly early times on Sunday, so I’d rather not rush to try and walk cross country the same day.

Here are some photos I took of Rocky jumping over the weekend. 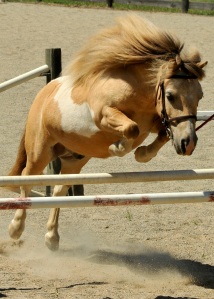